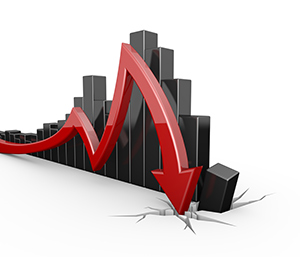 We're moving closer to a stock market crash in 2016…

But according to Money Morning Global Credit Strategist Michael Lewitt, a 29-year veteran hedge-fund manager, this is just a bear market rally. And it shouldn't be mistaken for a bull market surge.

You see, this rally hasn't been based on healthy fundamentals. Strong earnings reports, solid balance sheets, and a growing economy – these are what's supposed to move the markets upward.

But we've had none of these developments. No, there's only one thing that's keeping this rally going…

And that's the U.S. Federal Reserve.

The Fed says it has two primary goals right now. Most already know them: to contain inflation and promote full employment. But it's also subtly added another objective, according to Lewitt.

The Fed wants to make sure the stock market never stays down.

At both of its January and March meetings this year, the Fed postponed raising interest rates. That's been a green light for most institutional investors to keep the stock market afloat.

"The market's recovery appears to be based on expectations that the Fed will move very slowly this year," Lewitt said.

The Fed will have to eventually raise rates again in 2016 – most think by June. And when it does, it'll signal the end of this precarious rally.

The rally ending will also disillusion investors. They'll begin to see the three underlying reasons for a stock market crash in 2016.

Here are the three major reasons we could see a 2016 stock market crash, despite what the Fed has planned…

3 Reasons to Expect a Stock Market Crash in 2016 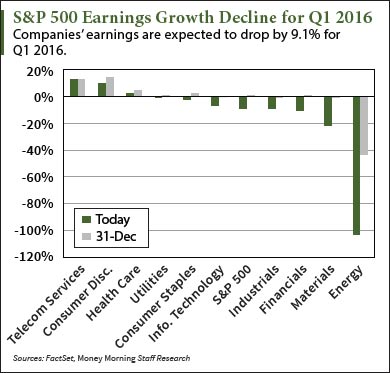 Companies' earnings are expected to drop by 9.1% for Q1 2016, according to FactSet. This could be the worst earnings season since the great recession, according to S&P Global Market Intelligence. And another drop would mark the third consecutive quarter of declines.

The drop in energy prices, a stronger dollar, and slowing global growth have all weighed heavily on U.S. companies' profits. Companies in the energy, materials, and financial sectors will be the hardest hit.

Although CEOs are known for giving overly conservative estimates for profit forecasts, earnings estimates are based on non-GAAP numbers. This means they don't account for things like one-time restructuring costs, according to CNN Money. In other words, the earnings decline could be even worse than expected, when looking at GAAP numbers.

In a desperate struggle to create economic growth, major central banks in Europe and Japan have switched to negative-interest-rate policies.

But there's a major problem. It's impossible for NIRP to generate positive economic growth, according to Lewitt. NIRP destroys capital.

The global economy is carrying around $200 trillion in debt. Soon, NIRP will become unsustainable as companies and households become too swollen with debt. The result will be a stock market crash and another global recession.

During this current five-week rally, most of the world's major central banks lowered their rates even deeper into negative territory. We saw the markets react positively.

But make no mistake – this is a market rally built on a house of cards.

There is $280 billion of debt rated B- or lower maturing in 2020, according to Lewitt. That's a significant portion of debt held by companies that may not be able to pay it back.

"It will be surprising if the U.S. economy does not experience a recession (or worse) between now and 2020," Lewitt said, "which would accelerate the demise of many of these companies."

This high-yield market benefited from low interest rates, but those days are coming to an end. And that's not because of the Fed, but because the market has repriced risk, according to Lewitt.

The Bottom Line: What we're seeing right now in the markets is a bear market rally, not a bull market surge. Once this market rally ends, investors will start to see three underlying reasons for a stock market crash in 2016. A dismal Q1 earnings season, negative interest rates, and the collapsing junk bond market will all lead to the next crash.

I want to know more