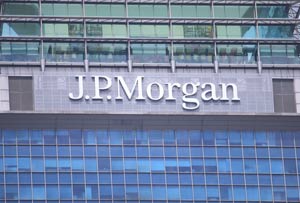 The Dow Jones Industrial Average is surging again as traders continue to react positively to a wealth of earnings reports from the March-ending quarter. This morning, U.S. bank JPMorgan Chase & Co. (NYSE: JPM) beat expectations and sent the Dow higher. But here's the thing: The earnings report was still pretty terrible. The investment bank reported a 6.7% decline in quarterly profits and a $5.52 billion slide in net income. Their investment banking revenue cratered by a stunning 24.5%.

But JPM stock is still up 2.7% this morning because analysts set expectations even lower than this bad slate of performance. Banking stocks are off to their worst start to a year since the financial crisis. They're blaming low interest rates, exposure to falling oil prices, increased capital requirements, increased regulation, and the slowdown in the Chinese economy, among other reasons.

In fact, news is just breaking that the U.S. Federal Reserve and the FDIC have rejected the "living will" tests of five major U.S. banks. These wills are plans to bring a bank through a potential bankruptcy and eliminate the need for another U.S. taxpayer bailout. Only Citigroup Inc. (NYSE: C) passed.

Futures for the Dow Jones Industrial Average today (Wednesday) were forecasting a 97-point gain this morning as traders were optimistic that financial stocks would beat their already beaten-down quarterly earnings expectations. Traders will turn their attention to additional earnings reports this week from Bank of America Corp. (NYSE: BAC) and Wells Fargo & Co. (NYSE: WFC) on Thursday, and Citigroup on Friday.

Here's a breakdown of why the Dow Jones is up this morning.

Blue gold: Water stocks may seem "boring," but humans can't live without water. So when a company solves the critical issue of water scarcity, it's a "must-have" investment…

Over the last 18 months, oil prices have suffered one of the worst crashes in modern history. But WTI prices have seen a strong rally over the last month, and there's one reason why they'll keep going higher in 2016 and beyond…