But earnings season really increases the stakes and the intensity of trading. Options premiums can fluctuate widely going into an earnings announcement, and things can get really interesting once the announcement is made, gapping up if the results are favorable, and down if they aren't.

…if you had to concern yourself with it at all.

Today, I'm going to make it all easier for you, and show you how you can make money without having to guess where the stock is going after earnings announcements.

Trading doesn't get much easier than that, and earnings season is just about to get into full swing, so you'll be able to make some serious money over the next few weeks.

It Always Works Out in One of Four Ways

There are really just four scenarios that can – and do – play out following an earnings announcement:

The best way to avoid the frustration of guessing which way a stock is going to move on an earnings announcement is to employ one of my favorite strategies: the straddle.

Why a Straddle Is Best for Earnings Season

Straddles eliminate the pressure of having to pick which option you have to buy in order to make money.

Now, you are incurring more cost by buying both options, so you need the underlying to make a significant move – big enough to cover the cost of the trade.

For more on this great non-directional trading strategy, click here.

But a straddle allows traders to potentially benefit whether the stock goes higher or lower.

That's not all. With a straddle, you can discount a number of variables and toss them right out of the equation.

For instance, you don't have to sweat questions like: will the company beat, miss, or raise guidance; announce a stock buyback program; forecast better or worse results in ensuing quarters… the list goes on.

Any of those questions can loom large over a trade, but with a straddle, they're not in the picture – and you're in a position to benefit.

You do, however, need to be concerned about when to close your straddle.

That's easy, too, once you understand the concept I'm about to show you…

How to Close at the Right Time Every Time

Once you've decided to use the straddle, it's important to think about whether you close out the trade before or after the company makes its earnings announcement.

I'll show you how to answer that, but before I do, we need to talk about implied volatility (IV) around earnings.

IV tends to increase going into an earnings report as the speculation of what the report will mean to the stock price going forward increases.

Buyers of options, even the straddle trader, have to be careful and know they are buying higher IV in their options prices during the period before an earnings announcement. It becomes a situation where one is likely to be buying at a high IV to sell at an even higher IV.

Take a look at the image below, which depicts what can happen to IV going into earnings: 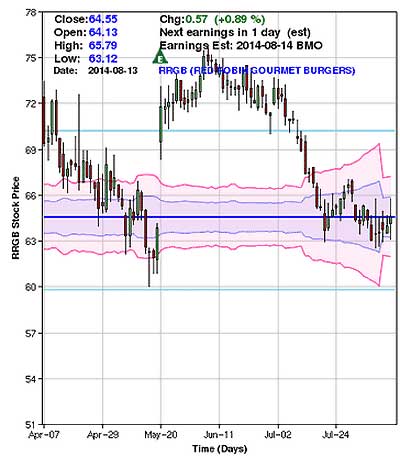 The below image shows a spike in IV in the options of a company coming up on their earnings: 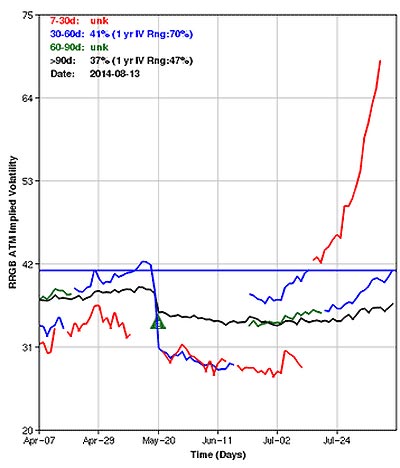 The risk in buying ahead of the earnings announcement is the fact the IV is likely to be higher. Once the announcement is made and the news is out, there is no more speculation, and IV heads lower.

Implied volatility comes out of the options pricing, and despite what happens with the price of the stock, "IV crush" can affect the option value negatively.

This shows what happens to IV when people "buy the rumor, sell the news."

When you close before the announcement, the biggest consideration is that you risk the stock actually gapping or moving enough on good or bad news, and you miss out on those profits you would have had if you held over the announcement.

That is the risk of opportunity lost.

When you close the day after the announcement, you may have profit in the trade as the stock has run up and implied volatility is increasing, which pumps up the premium, increasing the call option side of the straddle.

The risk here is that, following the announcement, any of those four scenarios we just looked at earlier can happen – and wreak havoc on your options. The stock might gap in the opposite direction, bringing the options value back to where you started.

Even though a breakeven situation is better than a loss, having the stock come back to where it was when you put on the trade is frustrating.

In addition to the depreciation in implied volatility, a loss of time value may adversely affect the option if the intrinsic value isn't offsetting that and maintaining or gaining profitability.

The primary thing that can hurt you in a straddle position is if the stock trades sideways or doesn't move enough to cover the cost of the trade.

When the stock is not gaining any more intrinsic value, the other conditions just mentioned – "IV crush" and theta, or time decay – can kill the value on that option.

How to Know for Sure

If you're trading options during earnings season, it's best to know the historical price moves of the underlying before and after earnings announcements.

With my proprietary tools, I can show you the historical behavior of stocks around earnings announcements, including how IV impacts a stock's price in both the run up to the announcement and the aftermath. 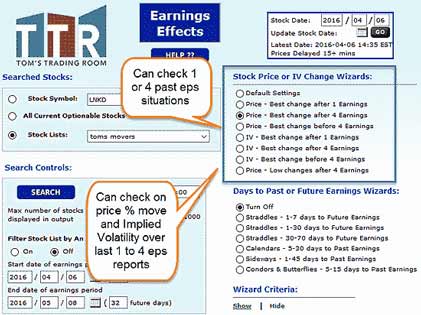 This is how I pinpoint stocks with the chance to make the biggest price moves (in either direction), and how I know when to close down my straddles.

The following screenshot shows the price move after the earnings on a list of stocks:

This next list shows the best price move prior to earnings:

Knowing how the underlying stock has behaved during past earnings announcements can give you a better chance at profitably closing out your straddle.

Tom teaches regular investors how to trade like seasoned pros twice each week in Power Profit Trades. Click here to get his service for yourself at no charge, and you'll receive Tom's latest investor guide that shows you how to make a 100% profit on one of the world's biggest, most valuable companies… in less than 30 days.