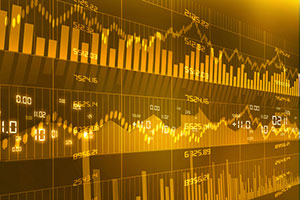 U.S. banks are struggling with emergency plans to address their statuses as "Too Big to Fail." The U.S. Federal Reserve and the FDIC are demanding that five domestic banks revisit their "living wills" by Oct. 1 or they could face regulatory sanctions, higher capital requirements, or growth restrictions. These living wills help banks brace a potential bankruptcy and prevent a need for a taxpayer bailout.

WTI crude oil prices slipped after Saudi Arabia's oil minister announced that production cuts were out of the question at a meeting in Doha, Qatar. Meanwhile, OPEC slashed its forecast for global oil demand growth in 2016.

On the economic front, U.S. retail sales fell in March by 0.3%, raising new concerns about the economic growth in the first quarter. The news came the same day that the federal government also announced weaker than expected inventory levels. The weak retail figure today is just another reason why the Federal Reserve is likely to be cautious with interest rates this spring.