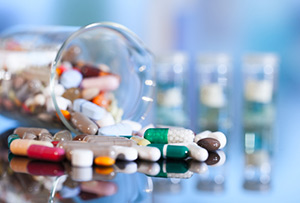 The Wall Street Journal cited Centerbridge Partners as the large bondholder. The New York-based private equity and distressed debt investor recently sent Valeant a notice of default. Valeant acknowledged the request, but it did not identify the debt holder.

Centerbridge owns about $250 million of Valeant's $1 billion bond issue due 2023. Under Valeant debt covenants, holders of 25% of any single issuance of bonds can call a default, according to The Journal.

The Valeant bonds in question declined to $0.76 on the dollar in mid-March. The bonds rebounded to a recent $0.82 as VRX stock rose modestly in recent weeks on news of a new board member, its search for a new CEO, and debt renegotiations.

Centerbridge's default move means Valeant has 60 days, or until June 11, to file its annual report and clear the claim as default. Centerbridge acted to protect itself and its VRX holdings from any additional delays.

Valeant said in a statement that it is "working diligently" to meet its previously stated April 29 deadline for filing its delayed 10-Ks.

Valeant's debt consists of about $12 billion in bank loans and about $19 billion in bonds. Last week, the company was able to renegotiate the terms of its $30.9 billion debt load with creditors.

But that one bit of good news was quickly overshadowed.

While the Valeant stock price has been steadily falling for months, we picked up on these issues last summer. And we've repeatedly warned investors to avoid VRX stock. If you're considering a play on this stock at such a low price, here's what you need to know about the VRX stock price today...

The VRX Stock Price Troubles Are Far from Over

The basic problem plaguing Valeant stock in 2016 is the company's flawed business model. Money Morning Global Credit Strategist Michael E. Lewitt has been warning investors about the issue since summer 2015.

Lewitt saw the Valeant stock drop coming back on Oct. 4. That's when he described Valeant as a "deeply troubled company" and warned that the company's problems were just beginning.

The Valeant stock price has fallen 83% since Lewitt's comments.

Money Morning Defense & Tech Specialist Michael A. Robinson has also been very bearish on the Valeant stock price from the start. Robinson says Valeant has become an "industry pariah." Investigations into sales and distributions "call the company's core operations into question, along with the steadiness and integrity of its leadership."

While Valeant is taking steps to right itself, it has a long road ahead. It has abandoned its controversial business model. Investigations are mounting. And the company's debt load is nearly three times its market cap.

It will take a while to determine what, if any, value is left in its assets. That's why we remain bearish on Valeant stock in 2016 and feel it's best to completely avoid Valeant stock for the remainder of the year.