The GoPro stock price surged 19% yesterday (Wednesday), and now readers are asking us if this GoPro stock rally is a buying opportunity.

Before we get into our recommendation on GoPro stock, here's what sent the GoPro stock price soaring yesterday… 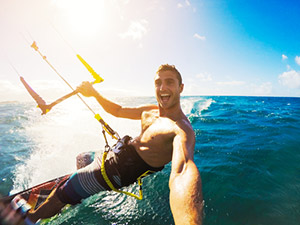 Coster was a core member of Apple's secretive industrial design team for more than two decades. He is credited with contributing to devices such as the iPhone 4 and iPad wireless keyboard.

"Mr. Coster will influence all aspects of design at GoPro in his new role, including hardware and software and services, lending his strategic vision and expertise to maximizing the GoPro user's experience from end to end," GoPro said in a statement.

Landing Coster from Apple is a huge win for the company, but the GoPro stock price still faces plenty of headwinds in 2016.

Plus, a large part of the recent rally in the GPRO stock price is attributed to short covering. Short interest is 32% of the GoPro stock's float.

Should I Buy into the GoPro Stock Price Rally?

GoPro has been struggling for the last several months amid concerns over the viability of its business. Competition is growing and profits are slipping.

Last quarter, GoPro posted a loss of $0.08 per share. That was well below the $0.03 per share analysts had projected. Revenue sank 32% year over year. The company cited lower sales totals for its cameras as the main reason for poor earnings. Then in January the company slashed its headcount by 7%.

If those poor estimates weren't enough, its latest 10-K filing was downright bleak.

The company said it anticipates R&D expenses will continue to increase in 2016. Unanticipated problems in developing products could also divert substantial resources. That could impair its ability to develop new products and enhance existing products. Of course, it will also boost costs.

"In future periods, we could again experience a decline in revenue, or revenue could grow more slowly than we expect, which could have a material negative effect on our future operating results," the 10-K said. "Specifically, we anticipate our first quarter and full year 2016 revenue to decline on a year-over-year basis. Lower levels of revenue and higher levels of operating expense investment may result in limited profitability or losses."

We've been bearish on the GoPro stock price since it peaked in October 2014.

And according to Fitz-Gerald, there is no reason to buy GoPro stock even though it's discounted…