Earnings season has been off to a bit of a rough start, with corporate earnings looking particularly bleak.

Just look at Monday, when U.S. stocks fell after a series of disappointing quarterly reports. And while all of the major indexes are up right now, analysts are projecting another round of subpar results.

That's why last week I told you that one of the best ways you can play earnings is to use the straddle.

Using options, especially the more complex strategies, can be tricky because of their short-term nature. And options prices can move quickly and change drastically, which might scare off many buy-and-hold investors.

But what if I told you that you can leverage the power of options to lock in triple-digit returns… without ever spending a dime on a single share of stock?

This method offers the luxury of time that long-term investors have without the high costs involved with buying the stock.

And while this particular buy-and-hold strategy does come with its risks, it could be your best option to survive this earnings season.

Despite common misconception, options are a means to minimize risk.

You can participate in and potentially capitalize on the movement of a stock without having to spend the money to buy the stock outright, which can be very expensive.

Even at this time of year (earnings season), they can be used by speculative traders to potentially capitalize on stock price spikes and drops on and around earnings announcements.

With options, you can adjust your existing positions to move into a profitable range or minimize your loss if a stock moves against your anticipated direction.

But while there's no denying the benefits options provide to traders, those benefits do come with risks… the most substantial being that options are a fixed-time investment.

Simply put… options expire. To be successful with option trades, you need the stock to do what you need it to before or at the latest at expiration (for spread trades) in order to realize profits.

And to be a successful options trader, you need the stock to move in your favor before or (at the latest) at expiration in order to realize profits.

Fortunately, one way to minimize your risk is to use options with expiration dates that are further out in time… and they're called Long-term Equity AnticiPation Securities (LEAPS).

LEAPS are long-term equity options with expiration dates of up to two years. They're no different from shorter-term options in that they have an expiration date, they can be found for both calls and puts, and they can be exercised. LEAPS offer traders the ability to "hold" their options positions for longer terms (up to two years) without having to combine several different shorter-term options contracts.

Take a look below at AMZN, which has LEAPS with expirations as far out as January 2018… 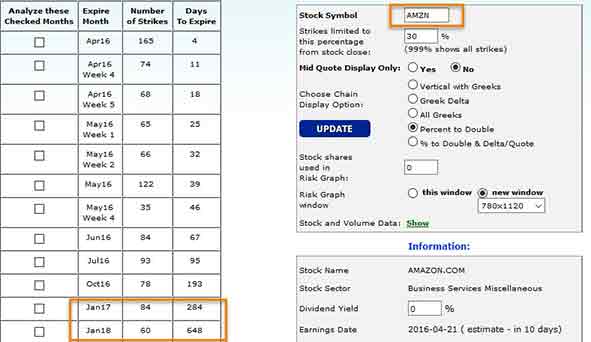 When to Consider LEAPS

I still consider a LEAPS option to be a trade versus an investment because even though it can be held for a long time, it still has an expiration date, which means it can't be held forever like shares of stock. Consider LEAPS as just longer-term (really longer-term) trades.

Now you do want to keep in mind that the more time until an option's expiration, the more expensive it will be due to the time value component of an option's price. But we'll take a look at the risks associated with LEAPS shortly. First, let's talk about the type of stock/exchange-traded fund (ETF) and pattern you'd want to trade LEAPS on… 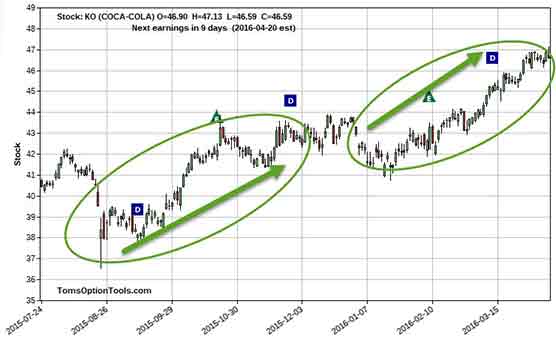 Stocks that show multi-month upward or downward runs – without having too many choppy, sideways moves – are the best ones on which to trade LEAPS. If you look at the example above on The Coca-Cola Co. (NYSE: KO), you can see that stock moved in a straight, upward line over the eight-month charting period. While there may have been a brief period of consolidation, the stock's history shows that it can run in an uptrend for a few months at a time.

For this type of upward pattern, you'd want to consider a LEAPS call option.

Now let's take a look at a straight, downward line on Williams Cos. Inc. (NYSE: WMB) over this same charting period… 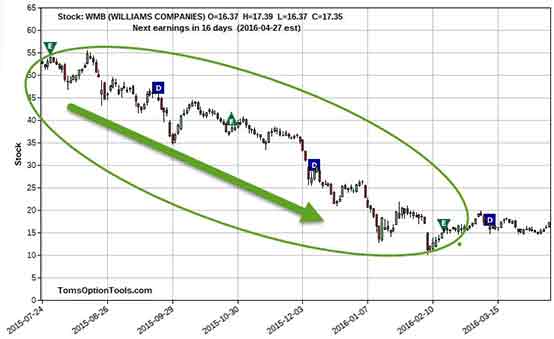 As you can see, the stock moved in a straight, downward line, making it a prime LEAPS candidate. In this example, you'd want to consider a LEAP put option with an expiration of over 30 days, at least.

Now I mentioned above that you want to avoid stocks that show multi-month upward or downward runs without having too many choppy, sideways moves.

This is what I mean… 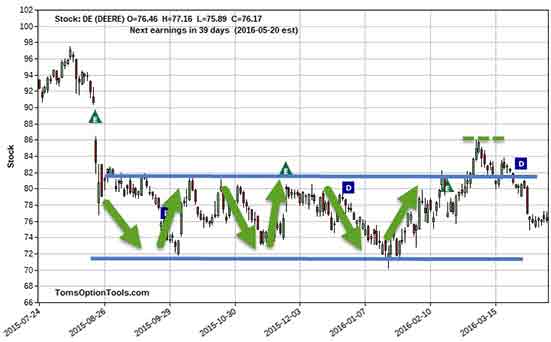 You can see in the chart above on Deere & Co. (NYSE: DE) that the short-term swings in six- to eight-point price increments are more noticeable, consistent, and usually happen within a month's time. This is why you wouldn't need a LEAPS option.

The chart plays out on its price-point swings within a month's time, so there'd be no real benefit in buying extra time until expiration via LEAPS when the stock's move will work out better for you within a shorter time frame.

The reason KO and WMB are better candidates for LEAPS trades is that they will take much more time to move into your profitable range. Additionally, unlike DE above, the price swings for KO and WMB are not as pronounced and easy to ascertain.

A Final Note on LEAPS

Like shorter-term options, there are both benefits and risks involved with trading LEAPS:

How to Make Profitable Earnings Season Trades Every Time: Earnings season really increases the stakes and the intensity of trading. With this strategy, you can make serious money without the frustration of guessing which way a stock will turn after an earnings announcement. In fact, you could secure gains whether a stock goes up or down…