First-quarter earnings season got underway this week and the outlook for S&P 500 companies is decidedly bearish. That's left news outlets and analysts talking about the possibility of an earnings recession in 2016.

The term "earnings recession" gets thrown around a lot, but many investors still don't know what one is. In fact, the question "what is an earnings recession?" has been one of our most-asked questions this month. 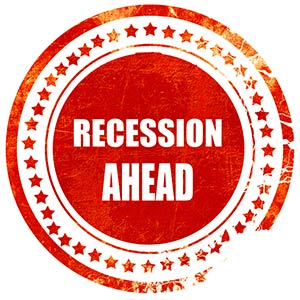 The estimated earnings decline for S&P 500 companies for Q1 is 9.1%. If the broad-based benchmark reports a decline in earnings this quarter, it will mark the first time the index has seen four consecutive quarters of year-over-year earnings declines since Q4 2008 through Q3 2009.

The good news is, the bar has been set very low for Q1 2016 earnings. That means earnings beats are expected. Analysts' earnings expectations typically tend to be overly bearish, and the average company beats estimates. We've seen some of that already this season.

Earnings per share (EPS) can be affected by buybacks, and there have been numerous buybacks this quarter. Today's low interest rate environment encourages companies to borrow money for next to nothing to buy their own shares. FactSet reports quarterly buybacks grew 5.2% to $136.6 billion year over year in Q4.

Also, an increasing number of companies are reporting some form of non-GAAP earnings, according to the Financial Accounting Standards Board (FASB).

For example, a company may write down an asset or restructure its organization. Those actions are usually accompanied by significant one-time costs that distort company profits. In such cases, a company will also provide "adjusted" earnings, or non-GAAP numbers. These non-GAAP numbers exclude one-time items.

That's why when looking at S&P 500 earnings, we only care about GAAP numbers. GAAP earnings include all figures, even the ugly ones. Non-GAAP numbers don't provide a clear (if any) indication of the true financial state of the company.

Many argue non-GAAP is really nothing more than a tool used by management to raise capital, the company's stock price, or stock-linked executive compensation.

And Gilani says that investors need to prepare for another quarter of earnings recession, especially if earnings are projected to drop another 9.1%.

Here's how Gilani says you can protect yourself from the earnings recession in 2016...

How to Prepare for an Earnings Recession in 2016

"Earnings used to drive equity prices, but not so much at this precarious juncture," Gilani explains. "That's because earnings are being trumped by central bank and currency moves, both of which not only impact earnings, but are the overriding focus of traders and investors."

Still, Gilani stresses that earnings matter -- a lot. Earnings are one of the three fundamental market-moving impactors in flux right now.

"If earnings are weak in the first quarter, and markets start to break down, then you know the bullish argument is being trumped by bearish sentiment that the worst isn't over, that we're headed into a recession, and that negative earnings growth is a warning flag," Gilani said.

"It doesn't make sense to be in the market if earnings are falling at the same time overseas currencies are being hit, and central banks are running out of ammunition, or rates may start rising."

When that happens, Gilani says, get out and get short.

Gilani advises investors to scour the earnings of the companies they own or are considering buying. He says to keep a keen eye on currency moves, because they will impact companies' earnings. And don't forget, as important as earnings are, the moves of central banks are even more important.