The oil patch is abuzz with rumor and speculation concerning the April 17 meeting of OPEC and non-OPEC oil-producing nations in Doha, Qatar.

In fact, the markets have already reacted to the meeting, even though it hasn't happened yet; the New York-set crude benchmark West Texas Intermediate surged more than 4.5% this week, a week that saw crude head up for the most part.

But as I've said throughout oil's ongoing volatility, these days, perception and expectation in the oil markets are far more important than fundamental supply and demand. Demand is growing, and higher prices can unleash more than enough supply to meet that demand.

So, let me show you what traders are "perceiving" right now in advance of this meeting - and what that means for crude prices from here on out.

Here's How the "Iran Factor" Fits In 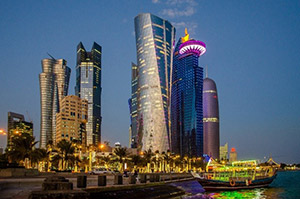 The Qatari government invited 20 oil-producing nations, responsible for around 73% of total global production. Most of the guests will be OPEC members, some not, but they'll all be in Doha to grapple with the global supply glut.

To tackle the glut, the parties have agreed to discuss a production cap. Not a cut. We can expect the first stages of a tentative agreement to proceed with the cap, but nothing more.

But here's the thing - the production cap on the table would cap production at January 2016 levels... which were some of the highest oil production levels ever recorded, around 10 million barrels per day.

So far, 15 countries - including Iran and Russia - have confirmed they'll be there on April 17. But one important oil producer won't be in attendance: The United States.

But keep in mind that the nature of American exports, including its relatively "new" status as a crude exporter thanks to the export ban's repeal, means American crude isn't exactly a global force right now.

Rather, most of the "drama" of this meeting will come from two bitter rivals sitting at the table, the Islamic Republic of Iran and the Kingdom of Saudi Arabia. The Sunni-Shiite enmity in the Middle East means these two countries are jockeying for regional supremacy and are indeed fighting proxy conflicts against one another.

But they both agree that something needs to be done about the supply of oil. Iran will be pressured to agree to the production cap on the table.

But I can tell you right now Iran won't agree to anything of the sort.

The Islamic Republic is just beginning to emerge from decades of crippling Western sanctions - sanctions that decimated its oil industry, which is among the oldest in the world.

Their productive oil fields are in a bad state. Investment was almost nonexistent, and the technology employed there is far out of date and creaking badly.

These problems mean the Iranians would have a hard time even coming up to the cap levels.

The Iranians will say that they need to bring crude production back to pre-sanctions levels before they can even think about agreeing to cap production, let alone cut it.

The Saudis and others will complain. They may even do so vociferously, but in the end, Iran will be given a pass to develop its domestic capacity.

The stakes just aren't that high for Doha, and the meeting's purpose isn't quite what it seems to be.

Here's what it's really about...

Influencing Perception Is the Goal

As I said, the production cap in question would be pegged to January 2016 levels, which of course were some of the highest ever.

Even Iran's "excess" production will be quickly and effortlessly absorbed by rising demand - no matter what any pundits have to say about it.

So, critically, no one really loses anything by agreeing (or not agreeing) to the cap.  It won't change supply, and it won't eat into revenues to state coffers.

Oil's influential traders, on the other hand, gain something important. They gain the accurate perception that there is now a "floor" in oil, because the cap changes supply expectations. It was after all the perception that whatever happens, there will always be more supply that led oil prices down.

After a production "freeze," that changes - rising demand will have time to catch up to supply.

Now these important players in the global oil patch have what they need to focus on when demand will catch up to "Doha cap" levels, and that's when we'll see stability return. Prices can and should rise on that basis eventually, but the balance of perception and expectation should support a price of $41 to $45 a barrel in the near term.

And that's all we need for the energy sector to start recovering...

What I learned in Abu Dhabi could mean big profits... After returning from five days of intense discussions in Abu Dhabi - where I met with high commissioners, OPEC ministers, and multinational energy CEOs - I'm struck by something I haven't seen before. There was NO consensus on where oil prices are headed. That's given us the perfect setup for an under-the-radar trade that can make five times your money in the next 60 days, no matter where oil prices move. Click here to see how.

For what Major is $41 to $45 adequate for its "recovery"? With wti avg of $42 for the next 12 months, I would project at least 20% to 35% falls for XOM, CVX, and RDS; and at least an additional 12% to 20% fall for BP. I do not follow others closely enough to give percentage estimates, but can think of none for which such a price would be "healthy".

Are you projecting for just the next few (8/10) weeks with anticipation of higher prices following?

the repo man for these oil fiends!