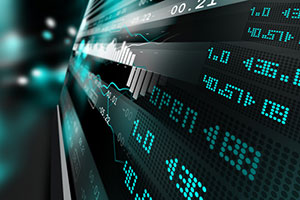 The Dow Jones Industrial Average finished slightly past 18,000 during Monday's session thanks to a slew of positive earnings reports and a slight recovery in oil prices. It was the first time that the Dow rallied through the 18,000 ceiling since July 2015.

Consumer discretionary stocks pushed the Dow higher on Monday thanks to strong performances in the toy and gaming industry. Both Hasbro Inc. (NYSE: HAS) and Mattel Inc. (NYSE: MAT) hit 52-week highs this morning after the former beat quarterly earnings expectations. The firm continues to see strong sales from its line of "Star Wars: The Force Awakens" toys.

On the economic front, former Goldman Sachs Group Inc. (NYSE: GS) banker and Minneapolis Federal Reserve Bank President Neel Kashkari called for significant reforms to the U.S. financial system. The central banker is raising concerns that U.S. taxpayers could again be on the hook for another massive bailout unless Congress or regulatory agencies address "Too Big to Fail" banks. The statement comes a week after American regulators rejected capital wind-down plans of five major U.S. banks. The federal agencies ordered the banks to revise their programs or they will hit the firms with sanctions.

Corporate defaults are happening at the fastest pace since 2009. According to S&P Ratings Services, 46 companies have defaulted on their debts this year. The latest defaults were coal producer Peabody Energy Corp. (NYSE: BTU) and surf-wear retailer Pacific Sunwear of California Inc. (Nasdaq: PSUN), which both filed for bankruptcy protection last week.

But the big story today was the price of crude oil. Crude cratered earlier in the trading session on news that the Doha production freeze talks collapsed over the weekend. However, prices slightly recovered on news of a strike among oil workers in Kuwait that will affect roughly 60% of the nation's oil production levels. Investors are watching energy companies, where more defaults are expected this year.

Production freeze talks fell apart after Saudi Arabia demanded that Iran join the agreement to support falling oil prices. Iran didn't even attend the meeting and said it plans to increase its production levels after the Western nations lifted economic sanctions. As Saudi Arabia continues to fight two proxy wars in Yemen and Syria, it's very unlikely that they will sacrifice production levels to rival Iran. WTI crude prices finished the session down a little more than 1.3%, while Brent crude slipped 0.4%. That's a significant turnaround from the 6.5% decline earlier today.