Army Chief of Staff Gen. Mark Milley went on record in Defense News to say the U.S. Army is in a state of "high risk" when it comes to its capability of fighting one or more large conflicts or defending the country.
Gen. Milley wasn't saying our military isn't up to the job; far from it. Rather, he meant that this critical capability is a tall order considering the threats we face right now and into the future.

North Korea, for instance, has announced its development of a miniaturized nuclear warhead. It already has a ballistic missile capable of flight to the U.S.' west coast.

Saudi Arabia is fighting a two-front war... Iraq, Syria, and Libya are now failed states and fertile ground for terror groups like Al-Qaeda and Daesh... The European Union and Turkey are reeling from homegrown Islamic State-sponsored terror and a crushing refugee crisis.

Worldwide, conflict and disaster have uprooted more than 60 million people - the highest number of displaced persons ever, even including World War II - in a humanitarian, logistical, and security nightmare.

Meanwhile, the National Association of State Chief Information Officers just released a report saying that we likely couldn't stop a cyberattack that happened simultaneously with a natural disaster, like a Category 5 hurricane, with our current cybersecurity capability.

So clearly, the world is not a safe place right now. And governments here and indeed all around the world have their work cut out for them when it comes to providing a defense that can match and defeat the threat.

Here's where our government is turning to help them do all that - and more...

In an Age of Cuts, Defense Spending Is Surging

As high as those numbers are, both are near historic lows. But that is changing...

For the defense sector, this is a point of inflection, the beginning of the pendulum beginning to swing in the opposite direction. Deloitte Consulting LLP expects the defense industry to roar back to growth this year, actually outpacing quarterly GDP growth in the United States and European Union. Record numbers of aircraft will be built this year.

There are plenty of niche defense stocks like Kratos Defense & Security Solutions Inc. (Nasdaq: KTOS) and FLIR Systems Inc. (Nasdaq: FLIR) that grow very well in a "pro-defense" business and political environment. My Radical Technology Profits readers made gains of more than 49% and more than 106% on Kratos, for instance.

And, indeed, these smaller firms are showing signs of a renewed, vigorous bull run as calls mount for more defense spending.

You can bet they'll see some nice gains, but the real play here is Big Defense: companies that win big, lucrative contracts for entire weapons platforms and that, in turn, dole out lots of business (and profits) to subcontractors. 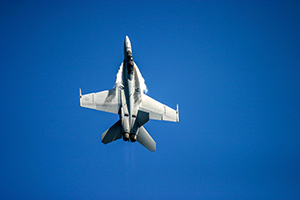 They're the fountainhead; the first beneficiaries of increased defense spending that can deliver investing profits for years, if not decades.

This company is leading in one of the fastest growing defense segments: Command, control, communications, cyberware, computers, surveillance and reconnaissance, or C5ISR for short, is next-generation thinking, and the lens through which future conflicts will be conceptualized and planned for.

On the other hand, Northrop Grumman has a long, storied history dating back its days as Northrop Corp. in 1939.

The company merged with Grumman Aerospace in the 1960s to form Northrop Grumman... and build iconic flying machines like the Apollo Lunar Module, the T-38 supersonic trainer, F/A-18 "Hornet" multirole fighter, and the B-2 "Spirit" strategic stealth bomber. 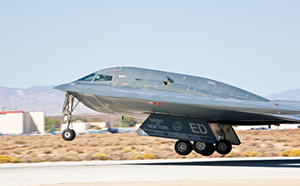 That deep experience means the company was a natural shoe-in when the Air Force went shopping for a next-generation strategic bomber. Grumman easily won the $80 billion contract to build the B-21 Long Range Strike Bomber. It's the largest aircraft contract ever awarded to a single bidder.

The October 2015 announcement lent the stock some momentum, to put it mildly; it's up 22% in the past 12 months - an impressive feat of upside for a big-cap stock in a hitherto slowing sector.

Then again, those leaner times kept Northrop Grumman hungry. The company was forced to get back to what it does best, using a vast pool of resources to drive new technology development - the firm's bread and butter.

The company has had great success with unmanned vehicles (UVs), or drones. Using Grumman's own radar and camera systems, these devices are deployed on land, air, and sea, performing tasks which were either too dangerous or physically impossible for humans.

These UVs help save and protect soldiers' lives, but they make great business sense, too. These drones have very high margins as well as limited lifespans.

That adds up to a lot of repeat business for drone manufacturers.

According to military sources, the average lifespan of a General Atomics MQ-1 "Predator" drone engine is about only about 1,080 hours - or 45 days. (That's assuming the pilot doesn't crash it before then, which, as you'll see, is highly likely).

But... in 2015, the USAF crashed a record amount of drones - 20. That's somewhere between $80 million to $260 million a year, just in their current limited roles, not taking into account projected growth.

And so there are high replacement costs, along with savings on crew and support staff - a winning combination from a defense contractor's perspective. And the more UVs that are deployed, the better.

Like I said, Northrop Grumman drones operate everywhere: The contractor supplies unmanned boats that scout ahead of combat ships, and UV helicopters that are launched from the decks of the ships to patrol the air and ground around them.

For a company that makes some of the scariest, deadliest weapons in existence, it's awfully friendly to its shareholders.

It's a little more than half as volatile as the wider market, and then there's that 12-month, 22% bull run I mentioned.

Northrop Grumman won't be alone among the defense big caps expecting a banner year. I'll be back to tell you about another terrific defense play that should have a very good 2016.

Final Hours: Claim your free prototype of this miraculous new technology... A just-released tech device is creating so much excitement that analysts believe sales could soar 13,000% - five times faster than smartphones. It's already backordered four months. But we are giving Money Morning readers a prototype of this technology for free. Click here to learn more and claim your FREE prototype. DEADLINE IS FAST APPROACHING.

It's not only a matter of recession and money.
It's the end of a 26 000 years cycle…
Squereling some gold bits can never be a bad idea.
But it's just a part of the problem.
You have to take in account that we enter a fourth and then a fifth dimentional aera.
To be rich or poor during the coming aera is a question of to be more or less conscious concerning the very life's purpose.
If you still didn't get it, it would be time to do.
Amitiés,
PLT