Last week, I told you that the world was just beginning to reckon with the fallout from the Panama Papers, the 11.5 million emails hacked from Panamanian law firm Mossack Fonseca.

That's because investigators around the world have only just begun to sift through the wreckage.

After U.S. tax authorities, the U.S. Justice Department, Panamanian, Brazilian, Thai, British, and a handful of other outraged countries launched their own inquiries, the Joint International Tax Shelter Information and Collaboration (JITSIC) Network convened a meeting of 28 nations in Paris on Wednesday to coordinate joint investigations.

The unprecedented international coalition intends to look into the 210,000 companies domiciled in 21 different offshore jurisdictions uncovered in the Mossack Fonseca emails.

Not only are investigations going to lead to a lot of buried treasure, they're going to bury a lot of rich, powerful, and crooked people.

And that's not all…

Of the over 500 banks and bank subsidiaries implicated in the Panama Papers, some are major global banks.

That creates a major trading opportunity for us – and I'll show you how to get into position to catch profits as investigators follow the paper trail.

But first, let the digging begin…

Digging Up the Dirt 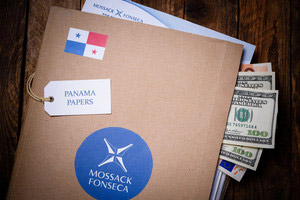 Hundreds of other government officials and friends of government bigwigs are disclosed in the Papers, including: former minister of finance of France and former managing director of the IMF Dominique Strauss-Kahn; former president of the Supreme Federal Court of Brazil Joaquim Barbosa; former head of North Korea's Daedong Credit Bank Kim Choi Sam; eight current and former members of China's Politburo Standing Committee; family members of China's past and present presidents and party leaders; and friends of Russian President Vladimir Putin.

And of course a lot of rich and powerful moguls, celebrities, Hollywood royalty, and sports icons are beneficial owners or investors in uncovered shell companies.

Entertainment billionaire mogul and co-founder of Dreamworks David Geffen is on the list. So is actor Jackie Chan and American Idol creator Simon Cowell. And sports legends: golfer Nick Faldo, winner of three Master's tournaments, and soccer icon Lionel Messi, are all implicated.

Even the CIA shows up in Mossack Fonseca's email files. We may never know who they were fronting, backing, enriching, for what reasons, and to whose ultimate detriment. But maybe some of it will come out.

As I told you last week, there are lots of legitimate reasons to set up so-called shell companies – and it's possible that many of the people listed above were not party to any illegal activity.

It's the shady setups rigged to evade taxes and clean dirty money that investigators are going after – and there are plenty of those domiciled in Panama and elsewhere around the world.

We are aware of the reports and are reviewing them. While we cannot comment on the specifics of these alleged documents, the U.S. Department of Justice takes very seriously all credible allegations of high-level, foreign corruption that might have a link to the United States or the U.S. financial system.

We already know there are direct and indirect links to the United States, to U.S. citizens, and U.S. intermediary shell companies. More than 200 scanned U.S. passports were in Mossack's email files, and more than 3,500 listed shareholders have U.S. addresses. As far as shell companies, the Papers reveal 3,100 companies tied to offshore "professionals" based in Miami alone.

But don't count on too many law firms getting into hot water. For the most part, firms manage to protect themselves and their practices by distancing their interests from the activities that go on inside companies they create.

Still, not all of the hundreds of law firms in the U.S. and around the world that set up these offshore shells are going to be clean. There will be lawyers and law firms that sink along with the shady characters and companies they're involved with.

Mossack Fonseca maintains it's done nothing wrong. Ramon Fonseca, the law firm's founding partner, distances the firm from beneficiaries and investors – who may be evading taxes or laundering dirty money by saying – normally the firm required banks to provide "due diligence" information verifying owners' identities and confirming that they were not involved in overt criminal activity before setting up or managing companies created for banks' clients.

Whether or not that's entirely true, it directly points to banks as intermediaries and facilitators, if not outright masterminds.

These Banks Are in Hot Water Again

Back in 2013, when banks were once again under intense scrutiny for aiding and abetting U.S. tax cheats, a Credit Suisse private banker explained that "the current trend is that lawyers prepare the structure, and the bank's focus is on managing the bank accounts (and not the structure)."  That quote comes from a Mossack Fonseca employee's notes of a meeting with the bank.

Banks are in the thick of it again.

So far, no big U.S. banks have been implicated in any of the Panama Papers, but that might change. However, it looks like a lot of the "usual suspects" who have been implicated, investigated, found guilty, and fined by U.S. regulators and the Department of Justice are back to their old tricks.

In 2009, UBS paid $780 million in fines, interest, and restitution to avoid prosecution in a highly charged case that drew the ire of the Swiss government over Swiss banking secrecy laws UBS thought would shelter it from U.S. authorities looking into tax shelters UBS bankers set up for thousands of U.S. citizens.

More than 500 banks and their subsidiaries registered at least 15,600 shell companies through Mossack Fonseca, according to the Papers.

There's little doubt bankers may face fines and jail time for their part in the gaming.

Mossack emails show that from 2010, some banks began transferring companies out of the banks' names and into the names of individual bank employees.

According to McClatchy, the newspaper company with complete access to all the Mossack emails, a 2010 email from Mossack Fonseca to HSBC "reveals the firm put companies into the personal names of seven HSBC bankers, including Judah and Nessim el-Maleh. Nessim el-Maleh was later convicted along with another el-Maleh brother in a cannabis-for-cash scheme in Paris, where bags of money from drug deals were laundered through HSBC accounts."

Investigations are going to be the end of some bankers – and maybe even some banks. But, to be sure, none of the big European banks that just pay fines for their misdeeds, like you and I pay a toll to use a bridge, are going down.

But their stock prices just might head that way…

The Best Way to Short the Dirty Banks

One way to play the exposure of big European banks to fallout from the Panama Papers is to short the iShares MSCI Europe Financials ETF (Nasdaq: EUFN). HSBC Holdings Plc. (NYSE ADR: HSBC) accounts for 7.74% of EUFN's portfolio, and UBS another 3.75%.

Fallout from the Panama Papers is just beginning to stir some dark waters, so shorting EUFN now may be a bit premature. The exchange-traded fund looks like it could get above $19 and make a run for $21 to $22 if more stimulus out of the European Central Bank tickles bank investors.

But with the Panama Papers hanging over some giant European financial institutions, shorting EUFN above $21 to $22 is a good bet.

I'll be keeping you updated on everything to do with the Panama Papers, and as more specific details come out, I'll be making some very specific recommendations on how to profit from what could prove to be a treasure trove of salacious facts.

The "Panama Papers" Are Just the Tip of a Giant Iceberg: The Panama Papers are already having a profound effect across the globe, but it's just getting started. The fallout will drown more world leaders, banks, and even entire governments – so it's important to understand how the shell game is really played…