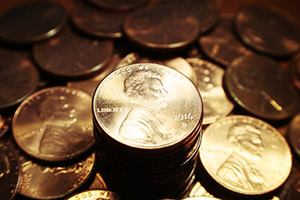 It's that kind of blistering gain over a short period of time that attracts investors to the best penny stocks of the week.

While penny stocks can bring huge profits, they can also bring volatility. That's why Money Morning experts recommend that penny stocks only represent a small percentage of your portfolio. And one stock should never account for more than 2% of your investing money.

Money Morning Chief Investment Strategist Keith Fitz-Gerald says the key to finding the best penny stocks in 2016 is the same as finding any strong investment. You need to know what to look for and have the right risk tolerance. You also need to maintain perspective – not every penny stock is a triple-digit winner.

At Money Morning, we focus primarily on penny stocks listed on major exchanges. These are less risky than penny stocks trading on the Over-the-Counter market or the Pink Sheets.

While they don't trade for pennies per share, they still offer the prospect of substantial gains over a short time frame. And they're much less risky.

Here are the five best penny stocks this week, including one that's already brought a profit of 252% since the start of the year…

The 5 Best Penny Stocks this Week

Best Penny Stocks No. 5: aTyr Pharma Inc. (Nasdaq: LIFE) is biotherapeutics company engaged in the discovery and clinical development of products for patients suffering from severe and rare diseases. The company develops Resolaris, which is in phase 2 clinical trials for treating adult patients with facioscapulohumeral muscular dystrophy (FSHD), a rare genetic myopathy with an immune component. Shares have been rising over the last several weeks on heavy insider buying. On April 11, a director bought 85,000 shares. On April 12, a director bought 32,659 shares. Today, another director purchased 66,219 shares. Last Tuesday, BMO Capital Markets initiated LIFE with a "Market Perform" rating. Shares finished last week at $4.10, a 30.9% weekly gain. Shares of this penny stock added 1.43% Monday to $4.25.

Best Penny Stocks No. 4: Granay Montero SAA (NYSE ADR: GRAM) provides engineering and construction, infrastructure, real estate, and technical services in Latin America. In February, the company received a $48.2 million, three-year contract to provide comprehensive work and maintenance services in Lima. In January, GRAM inked a $63 million, five-year contract in Columbia that comes with the option of extending it for two additional years. The company reports Q1 results on April 29. Shares ended last week at $6.21, a 58% gain for the week. Shares added 6.28% to $6.60 Monday.

Best Penny Stocks No. 3: Chesapeake Energy Corp. (NYSE: CHK) engages in the acquisition, exploration, and development of properties for the production of oil, natural gas, and natural gas liquids (NGL) from underground reservoirs in the United States. The distressed energy company has been struggling due to the prolonged plunge in oil and natural gas prices. But last Tuesday CHK shareholders received some good news. Tudor Pickering upgraded CHK to "Hold" from "Sell." CHK has traded higher in recent weeks after amending credit facilities. CHK shares ended last week at $6.03, a 60.4% gain. Over the last three months, CHK shares have climbed 63.48%.

Best Penny Stocks No. 2: Great Basin Scientific Inc. (Nasdaq: GBSN) is a molecular diagnostic testing company that develops systems designed to test hospital-acquired infections. Shares surged 64.43% to $4.43 Friday after the company said it sees Q1 revenue up 59.4% year over year. The company also reported its number of revenue-generating customers grew to 222 as of March 31, a 119.8% year-over-year increase. "We are extremely pleased with the Company's execution over the last 12 months, including our ability to significantly grow our customer base, develop and launch new tests, and the accelerating growth in our revenues," the company said in a statement.