While high-dollar Hillary Clinton speaking fees have been campaign fodder for months, one aspect of the issue hasn't received much attention. 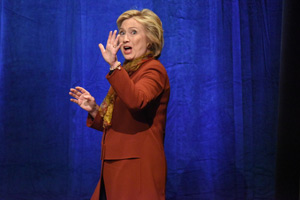 It's likely that at least some of the speaking fees the former secretary of state collected in the period leading up to her declaration as a candidate for the Democratic presidential nomination were funneled into her campaign.

This news comes amid increasing scrutiny of the Hillary Clinton speaking fees she received in 2013 - at $225,000 a pop -- for three speeches she made to Goldman Sachs Group Inc. (NYSE: GS) clients.

Her campaign rival, Vermont Sen. Bernie Sanders, maintains that the speaking fees and campaign donations Clinton has received have compromised her ability to be tough on Wall Street should she be elected president.

She says the apparently cozy relationship has never affected her decision-making, asserting in a recent CNN debate that she had "called out" the big banks on their mortgage behavior.

"Secretary Clinton called them out. Oh my goodness, they must have been really crushed by this," Sanders responded sarcastically. "And was that before or after you received huge sums of money by giving speaking engagements? So they must have been very, very upset by what you did."

Even if the money hasn't influenced her in any way, Clinton at the very least has exhibited poor political judgment in creating such a close relationship with one of the most vilified groups in all of America.

Now, with all that brewing, add some early 2015 Hillary Clinton speaking fees that at least give the appearance of backdoor campaign donations.

Whatever her reasons, what she did then just adds more fuel to the notion that Hillary Clinton simply can't be trusted...

Did These Hillary Clinton Speaking Fees Jump-Start Her Campaign?

Hillary Clinton has not needed to do much self-funding, as she and husband Bill have near-unmatched abilities when it comes to political fundraising.

But campaign records show that as of last month, she's put $560,983 of her own money into her presidential campaign - approximately half of which ($278,821) was donated in the weeks following her official entry into the race in April 2015.

"The amount of money is striking," Lawrence Jacobs, director of the University of Minnesota's Center for the Study of Politics, told Yahoo! News. "It seems to be an important piece of the puzzle. One question [about Clinton's speeches] is why she would take the risk of taking so much money from Wall Street and other interest groups. Now we see the full picture. It appears she needed some of the cash to finance her campaign."

The juxtaposition of the six speeches with the launch of her campaign raises more ethical questions for Clinton, who can't afford any more hits in this area. Polls consistently show that more than half of all voters do not consider her honest and trustworthy.

Because money is fungible, it's impossible to say with certainty that Clinton moved funds she collected in speaking fees directly to her campaign coffers. But at least one suspicious incident suggests that's exactly what she was doing back in early 2015.

When a small nonprofit with ties to the Clintons, the American Camping Association, called to arrange a March 19, 2015, speech by Hillary Clinton, they were told they'd have to pay $260,000.

That's quite a bit higher than the $225,000 that Goldman Sachs supposedly "offered" for each of its three Hillary Clinton speeches. And the American Camping Association did not offer the higher sum - it simply was told that was the Hillary Clinton speaking fee they had to pay.

"It's hard to see how it fits with the mission of that organization to pay $260,000 for a speaker who is about to run for president," Anne Weismann, executive director for Campaign for Accountability, told Yahoo! News. "It all kind of stinks."

More Problems for Hillary: The FBI investigation of the Hillary Clinton private email server recently branched out into a new direction that could cause her a lot more problems than whether or not she mishandled classified information. If the FBI finds a "smoking gun" here, the Hillary Clinton campaign will suffer a blow from which she may never recover...

what silicone valley company dis trump,clinton and 70 plus congress invest in.