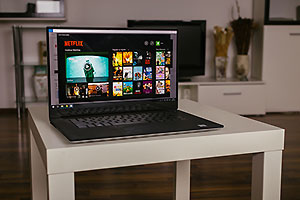 Netflix reported mixed earnings last night (Monday) along with low guidance figures, and now the Netflix stock price is down 11.51% to $95.11 this morning.

But today's drop for the Netflix stock price should not be a major concern for investors. You see, Netflix Inc. (Nasdaq: NFLX) stock is always volatile after earnings, and this is just a short-term issue. In fact, NFLX stock is still one of our favorite long-term investments.

But before we get to our outlook for the Netflix stock price in 2016, here's what you need to know about Netflix's Q1 earnings report. First, here are some of the bullish results…

And while those were all bright spots for the company, these numbers are having the biggest impact on the Netflix stock price this morning…

The Netflix stock price after earnings is always volatile. That's exactly what is happening today.

And while Wall Street is focusing on these short-term guidance figures, these "experts" are missing the bigger picture that we've been telling Money Morning readers about all year. Here's what you need to know about the NFLX stock price in the long term…

The Biggest Key for the Netflix Stock Price in 2016

While many will focus on the trimmed estimates, those targets still mean the Netflix stock price would climb 20%, 45%, and 52% from today's low. So there is still huge upside for Netflix shares.

While Netflix is no longer a young company, it's still undergoing a growth spurt that will take some time to fully mature. That's why we like Netflix long term.

Netflix is already a preeminent provider of global entertainment. It continues to increase its worldwide presence and is determined to create blockbuster original content.

Over the next five years, 35 analysts from Thomson First Call expect NFLX to boost earnings by 28.2%. That compares to an industry estimate of 15%.

Despite today's decline, the Netflix stock price is up 214.65% over the past three years, making it one of the best S&P 500 performers.

Stay informed on what's going on in the markets by following us on Twitter @moneymorning or liking us on Facebook.
Related Articles: