What Is "Corrupt" Money in Politics?

Political contributions are considered "corrupt" if they're given with expectations of getting something in return. Often, when big industry donors give financial support to political candidates, they do so to have the candidates' ears. Many of these donors only want to create a favorable environment for their respective industries. Rather than giving money directly to the candidates themselves, these underhanded donors will write a check to super PACs or "dark money" nonprofits. For more info about the relationship between corrupt money and politics, see this quick video explanation...

But, under the same ruling, labor unions were also given more spending flexibility. And while Sanders reserves his harshest attacks for Wall Street donors and super PACs, he doesn't criticize the large role labor unions have in campaign fundraising...

You see, as much as he tries to distance himself from "corrupt" money in politics, Bernie Sanders benefits from the outside money of big labor unions.

One labor union in particular, National Nurses United, has spent nearly $2.8 million on ads and flyers supporting the Vermont senator in 2016, according to the Center for Responsive Politics. The union has formally endorsed Sanders for president. It buses some of its 185,000 registered nurses to his campaign rallies from state to state, The New York Times reported.

And another union, the Communications Workers of America, also spent $124,080 in support of Sanders' campaign, according to the Center for Responsive Politics. 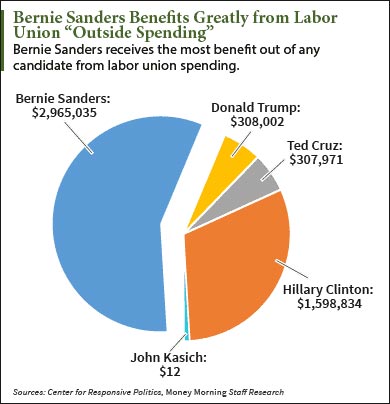 From 2012-2014, labor unions donated $418 million to Democrats and left-wing causes, according to a report from the Center for Union Facts.
To be fair, Sanders has benefited from far fewer outside spending groups than Democratic presidential front-runner Hillary Clinton has, as he has noted. Clinton has received $6.2 million more than Sanders in benefits from super PACs and nonprofits.

But another irony in the Sanders' campaign is his attendance at donor retreats that hosted Wall Street lobbyists and other donors...

And last year, Sanders directly accepted around $55,000 in Wall Street donations, according to The Wall Street Journal.

As a voice for campaign finance reform, Sanders is still one of the most trustworthy. He's accepted far less money from major industries than any other presidential candidate, save real estate magnate Donald Trump.

Even so, Sanders isn't untainted by the touch of big money in politics.

Beyond Obamacare: As controversial as Obamacare has been, it doesn't go nearly far enough for Bernie Sanders. His healthcare plan proposal, "Medicare for All," is essentially the single-payer type of system common in much of Europe and Canada. In short, the government runs the healthcare system, and everyone is covered for everything. Sounds great. But you'll be shocked when you see what it's going to cost...