And the bet I'm thinking of now is not just big – it's gigantic.

It stood at $1 trillion as of March 15, the last date for full data. And that's the biggest version of this sort of bet since at least 2008.

Normally, I'd tell you to ignore what Wall Street is doing. But in this case, you should pay heed – but not for the reason you'd think.

First, I'll tell you all about this $1 trillion bet.

Then, I'll show you why you should bet against this so-called smart money.

Finally, I'll show you where to place that bet.

It's an investment that's beaten the S&P 500 by 77% over the past two years – and should do even better during the next few.

When a $1 Trillion Bet Is Dead Wrong 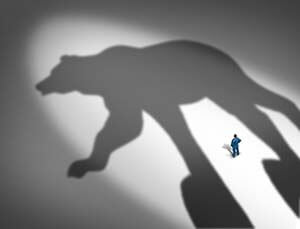 According to the investors making this $1 trillion bet, the big rally that began Feb. 11 is about to run off the rails.

Indeed, as of March 15, investors sent bets against U.S. stocks at 4.4% of available shares. That equates to a short position of $1 trillion. We haven't seen bearish bets like this since 2008, just before the 2009 bull market began.

To get back to their six-year average, short bets against the market would have to fall by about 15%. That last occurred in September 2010, setting up a rally in which the S&P 500 gained 16% in six months.

Now then, I've been one of the few analysts this year to say the market would snap back. And just like I've been predicting, since it hit bottom Feb. 11, the S&P 500 has gained 13.5%.

So, let's look at why shorting this market is a very bad idea…

Over the last couple of months, we've chatted a few times about the size and scope of this rally. In fact, I even showed you my technical analysis of the market using a series of charts. And I said those numbers clearly showed that high-tech stocks had plenty of steam ahead.

And to date, I've been right in those calls. Had you taken my advice and invested in stocks when just about everyone else was telling investors to sell, you'd be crying all the way to the bank.

Don't worry if you missed the rally. I still see plenty of upside ahead for the rest of year, particularly in high tech.

You don't have to be Warren Buffett to know that the best opportunities in the market come when the pros are their most pessimistic.

According to a recent survey by Citigroup Inc. (NYSE: C), more people think the market is more likely to fall 20% than to gain that much. That's significant, because a lot of pros are betting we're about to enter a classic bear market.

Not only that, but Citigroup says its large clients are holding 9.3% of their total portfolios in cash. That's 29% higher than the 7.2% they held in cash a year ago.

In other words, we're looking at the very real possibility of a "short squeeze." That's when the market can hand you huge gains when short bets go wrong.

Here's how that works…

When you bet against a stock and it starts to go up, you have to buy shares to cover your position. The slightest bit of good news can move the stock, and the shorts then have to buy en masse to cover their bets.

Let's take a look at some news from this week to see what that means.

GoPro Inc. (Nasdaq: GPRO) makes video cameras for action sports like skiing and cycling. Following its June 2014 initial public offering, the stock was a highflier, soaring from an opening price of around $36 to a peak of $93.85 on Oct. 7, 2014.

Since then, GoPro has fallen deeply out of favor. Data from Yahoo! Finance shows that short interest – the percentage of shares betting on a decline – hit nearly 30% on March 15.

The bearish sentiment explains why the stock hit a closing low last Tuesday of $11.68. That was just three days before short contracts for put options were set to expire.

But after news broke that the firm had hired a top designer from Apple Inc. (Nasdaq: AAPL), the very next day GoPro soared some 18.3% on volume that was 123% above its three-month average.

The same thing happened yesterday when 3D Systems Inc. (NYSE: DDD) got a major Wall Street upgrade. At one point, shares of this 3D printing leader were up more than 15% on heavy volume, making it the day's third-biggest gainer among U.S. stocks.

Some of the huge buying was undoubtedly the result of short-sellers covering their positions. Yahoo! Finance says some 29 million shares had been sold short as of March 15.

No, I'm not suggesting that the S&P 500 will see those kinds of one-day rallies.

However, if we keep getting the kind of good economic news we've been talking about lately, all those short bets against the market are set up to help drive stocks even higher.

And that's great news for tech investors. Bullish bets through futures contracts on the tech-centric Nasdaq 100 are at their lowest levels since September 2011.

Yet, the Nasdaq 100 has risen seven out of the past nine weeks. Not only that, but it's crushing the broader market.

All of which reinforces what we've been talking about here at Strategic Tech Investor for years now – high tech is the place to be if you want to grab market-crushing gains.

How to Grab Those Gains

That's why I believe every investor ought to own the Fidelity Nasdaq Composite Index Tracking Stock (Nasdaq: ONEQ). This is an exchange-traded fund (ETF) that seeks to mirror the returns of the broad tech market.

It's rooted in the big caps. ONEQ's top 10 holdings are a "Who's Who" of tech leaders in mobile, the web, computing, biotech, and e-commerce.

However, ONEQ is also a great way to ride the gains of exciting small- and micro-cap stocks without all the volatility that comes with these plays. Those two categories compose more than 17% of ONEQ.

One of the things I really like about ONEQ is that it's a "twofer" – along with its tech focus, we get diversification.

Tech and the life sciences make up more than 59% of the fund's holding. Consumer stocks account for 20% and finance 7% of ONEQ.

Make no mistake. This is a great fund to hold for the long haul. Over the past two years, ONEQ has gained 23% – beating the S&P 500 by 77% during the period.

This covers a period when Wall Street repeatedly said a "tech bubble" was at hand.

As we've been seeing, that was baloney.

So, the one thing you don't want to do is follow the "smart money" and bet against tech stocks.

If you do that, you'll miss big opportunities like the one that's unfolding right now.

Our Favorite Defense Play of 2016: Governments have their work cut out for them when it comes to providing a defense that can match and defeat any threat. As they look to expand their capabilities, big defense stocks will profit. This industry juggernaut gained 22% in 2015, but with lucrative contracts up for grabs, 2016 promises to be even better…