The deadline for first-round bids for Yahoo! Inc. (Nasdaq: YHOO) ended on April 18, and investors keep asking us "who will buy Yahoo?"

Right now, there are three confirmed companies who are interested in buying some part of CEO Marissa Mayer's company. Even though Yahoo's revenue declined nearly 12% in Q1 2016 from the same time a year ago, the Internet giant's audience size and patents make it an attractive investment. 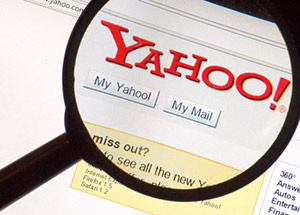 But before we get to the three companies most likely to buy Yahoo, here's why a Yahoo acquisition is drumming up so much interest…

It still isn't clear if Yahoo will sell its patents separately or as part of its Internet business. But Business Insider projects the patents could be worth as much as $4 billion.

Yahoo has over 6,000 intellectual patents in advertising, data, and mobile technologies. Owning the patents will allow a company to go through fewer hurdles when it tries to create new technology and devices.

Aside from the patents, Yahoo's platforms still attract millions of visitors every month. According to analytic company comScore, more than 600 million people visit Yahoo's sites every month.

And two of Yahoo's strongest assets are Yahoo News and Yahoo Mail.

Just in October 2015, Yahoo News and Yahoo Mail received a combined total of 210 million visitors, according to The Wall Street Journal. While Yahoo has yet to successfully monetize these services, the right company could turn each platform into a massive revenue source.

Now you know why a company would want to buy Yahoo. And here's the three confirmed companies that submitted first-round bids…

Who Will Buy Yahoo? Start with These 3 Companies

In the beginning of February, Verizon put AOL CEO Tim Armstrong in charge of exploring a bid for Yahoo's assets, according to Bloomberg. Armstrong and Mayer were each formerly executives at Alphabet Inc. (Nasdaq: GOOGL).

Bloomberg also reported that Verizon already has a specific succession plan if it can acquire Yahoo. Verizon would replace Marissa Mayer with a combination of Armstrong and Verizon's Executive Vice President Marni Walden.

As mobile service demand slows and competition increases, Verizon is looking to expand its services. It has been aggressively turning itself into a service provider as well as a content provider through acquisitions like AOL and AwesomenessTV.

The next company interested in acquiring Yahoo is TPG.

Equity firm TPG was founded in 1992 by David Bonderman, James Coulter, and William S. Price III. The firm buys assets from distressed companies it finds useful. Some of TPG's acquisitions and investments include:

Fortune believes that TPG could be one of the firms who will buy Yahoo because of its legacy assets.

Bain, founded in 1984, has a wide range of investments and specializes in venture capital.

The global investment firm has acquired or invested in companies like:

Bain has led consortiums and worked with other companies for buyout deals, which is why it's open to partnering with Vista Equity Partners.

The acquisition costs are lowered for Vista by partnering with Bain, and Bain receives insight from Vista's specialization in tech investments and acquisitions.

The Yahoo stock price today is up over 4% as investors anxiously wait for a buyout. Analysts at Thomson First Call place a one-year price target of $38.85 on YHOO stock, which could be a gain of 4.9% from today's opening price of $37.03.

The Bottom Line: "Who will buy Yahoo" is a very popular question right now. While reportedly 40 companies were interested, Yahoo appears to have three serious bidders right now. Since a bidding war may soon start, the Yahoo stock price could continue to rise in the short term.

where are the 3 companies? I didn't find the names in entire article. Whats this, a clickbait?

Thanks for visiting Money Morning. To find out the names of the three companies, and to read the rest of the article, simply put your email address in the box provided.