For a few hours.

If ever there was a "non-event," the supposed "fallout" from this past weekend's meetings certainly appears to be one of them.

In fact, this is what you'd expect from a successful Doha meeting, not from a failure.

Even so, some pundits are now saying that Saudi Arabia, Iran, and others will be increasing production after Doha.

They won't – and the market knows this, as oil prices are rising, not falling. Here's why…

Kuwait (Unintentionally) Cut Production on Its Own 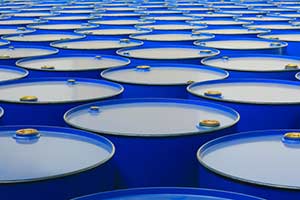 The short-term reason for rising oil prices despite the disappointment from Doha is Kuwait.

Because of a three-day oil workers' strike, Kuwaiti oil production was cut from 2.8 million barrels a day to about 1.5 million.

Now, the strike in Kuwait has been resolved, and the country's production will be coming back onto the market.

But remember, for a long-term rise in oil prices, all we needed from Doha was recognition among oil traders that a price floor was forming. That can be accomplished by setting a ceiling on overall production, or by traders forming an expectation about the effective price range of oil, given rising global demand and large recoverable oil reserves.

An accord at Doha would have accomplished the floor through the former mechanism. That failed.

But the market has now done it on its own, using the second approach.

Now, the effect of the Kuwaiti strike has been tempered even more by indications from Iran that the country will be able to reach its targeted production levels by the end of June. Tehran's decision not to attend the Doha meeting combined with OPEC leader Saudi Arabia's insistence that all OPEC members agree to the cap guaranteed that the deal fell through.

Keep in mind that since the lifting of Western sanctions against Iran last year, the Islamic Republic has struggled to increase its production to pre-sanction levels. And while they will ramp up production somewhat, and some of that additional oil will be exported, much of this is bluster.

Despite what Tehran says, their ability to sustain maximum production and translate that into exports is highly debatable (as you've seen me mention before).

According to several ministerial contacts Tuesday morning, Moscow will now ramp up oil production in response to the apparent collapse of the Doha deal.

This is bravado, and signifies little of consequence, for two reasons.

First, Russian production is straining the upper limits of what the country's oil fields can produce now, and a decline is coming shortly as primary basins mature (as you saw earlier here).

January's daily total production of above 10 million barrels a day – the number that Doha negotiations were to set the cap at – is not a level that Moscow can keep up on a consistent basis.

Second, the only way Russia can secure additional export volume is by crowding out other producers. But end users will only abandon existing contracts if they're offered a better deal.

That guarantees a pricing war and a rapidly declining revenue flow even if Moscow does gain that volume. And that's hardly what Russia wants at this point, as its central budget is a mess, and low oil prices mean that it's deteriorating fast.

In fact, the same can be said for other OPEC members…

Oil Production Will Not Be Increasing

Some so-called pundits are now suggesting that all producers will open the taps and flood the market.

But that is in no one's interest. Given that January's aggregate production figures in practice work as a ceiling (because few producers can exceed, let alone sustain, those levels), this is all just bluster and threats.

So that's where we are on the other side of the Doha "non-event."

The oil market is moving toward a balance even though excess production is possible – and it's doing so without Doha.

Recall that when WTI prices were well above $100 a barrel back in 2014, we had a larger surplus of supply at Cushing, Oklahoma (the main pipeline exchange in the country and the location where the daily WTI price is fixed) than we do now.

The reason is simple. The issue is not that there's a surplus of oil.

Rather, the issue is the recognition that there is excess extractable supply in the ground and easily retrievable.

And with the market apparently realizing that not all of that will be coming to market soon, the consensus among oil analysts is now that crude oil prices will be moving up into the high $50s by the end of the year.

I retain my estimates of $42 to $45 WTI and $48 to $50 Brent by mid-June. We are effectively there already, although expect some volatility to move that trading band a bit in the interim.

And expect the battleground for Saudi Arabian, Iranian, and Russian production to now shift to Asia, and in particular to the Chinese and Indian markets.

We may well be seeing some new geopolitical fireworks from there.

Saudi Arabia Will Create the World's Largest Public Company: Saudi Arabia is in a transitional period right now. As renewables and natural gas transform the global energy landscape, the Saudis are tapping into a new mantra – "diversify or die." And this strategy includes creating the single largest publicly traded stock in the world…