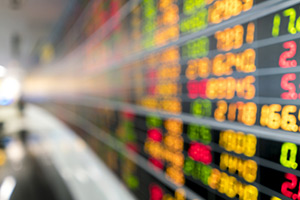 Dow Jones Industrial Average News 4/22/16: On Friday, concerns about global growth were evident when Caterpillar Inc. (NYSE: CAT) announced a steep slowdown in sales of equipment in the wake of subdued commodity prices. The firm reported net income of $494 million. That's down from $1.70 billion in the same period of last year. The big news from its report is that the firm lowered its full-year outlook.

Now, let's discuss what happened in the markets today.

The technology sector turned negative year to date, a surprising development given FANG stocks' immense role in the markets in recent months.

Shares of the Microsoft Corp. (Nasdaq: MSFT) were the biggest drag on all U.S. indices as the technology giant fell 7%. The company's earnings were slightly below expectations, as weakness in the personal computer industry continues to weigh on the software industry. Microsoft's downturn today wiped out as much as $30 billion in market value.

Meanwhile, Alphabet Inc. (Nasdaq: GOOGL) stock fell 5.4% after the company badly missed earnings expectations. The company said that it suffered from a stronger dollar and from increased spending to boost traffic for its mobile advertising services.

Next, concerns about the health of the U.S. manufacturing sector are on the rise after Friday's release of the U.S. Market Manufacturing PMI Index, which fell to 50.8 in April. Manufacturing activity shrank in the first month of the second quarter. Even more concerning: It's the worst month for U.S. factories in roughly six-and-a-half years, which could signal a pullback in hiring.

This type of drawback places even greater emphasis on next week's FOMC meeting. The U.S. Federal Reserve will meet on April 26-27 to discuss monetary policy, and weakening manufacturing activity will likely weigh on the sentiment of the central bank. According to a Reuters poll of economists, there is very little expectation that the Fed will take action on interest rates until June. Here's what to expect at next week's meeting.

Another sign of slowing economic growth in the United States: The Baker Hughes Inc. (NYSE: BHI) weekly rig count fell another eight platforms to 382 in the nation. That figure is down from 703 rigs in the same period in 2015.

The downturn in rigs helped fuel another rally in oil prices. WTI crude oil prices added another 1.3% on the day, finishing the week up more than 8%. Meanwhile, Brent crude prices added another 1.3%, finishing up 5% in the last five days. This week, the International Energy Agency announced that supply is expected to decline in the months ahead due to a significant cut in investment by non-OPEC nations. Global asset manager Natixis said today that U.S. oil production will decline by at least 500,000 barrels per day in 2016. They anticipate a cut of another 500,000 daily barrels 2017.