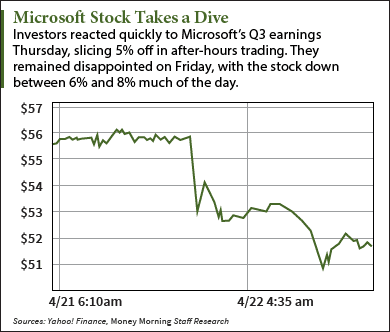 In the wake of an earnings miss, the Microsoft stock price today slumped as much as 9%.

This morning (Friday) the trend continued, with the Microsoft stock price opening down 6.7% from Thursday's close of $55.78.

"Overall, we had a solid quarter," CEO Satya Nadella said in yesterday's conference call with analysts. But judging by the plunge in the Microsoft stock price, few seem to agree.

Investors are unhappy not only because Microsoft missed on earnings for the first time in 10 quarters, but also because the company lowered guidance for the current quarter.

Revenue of $20.53 billion was 6% lower from the same period last year. Adjusted revenue was $22.1 billion, in line with Wall Street forecasts. And then there was the disappointing guidance…

Microsoft lowered revenue guidance for Q4 to $21.4 billion from $22.4 billion, pushing it below the analyst forecast of $23.1 billion.

The results raised concerns that Microsoft's shift in emphasis towards its cloud-based businesses and away from its traditional PC businesses is stalling. Year-over-year revenue growth in two of Microsoft's three major reporting segments was just 1%; in the third it was just 3%.

As expected, Microsoft's Windows business suffered from the 11.5% drop in PC sales. And while the company's cloud business did experience growth, it wasn't enough this quarter for Microsoft to make its numbers.

But the Q3 2016 Microsoft earnings aren't quite as bad as they look, especially for long-term investors…

When looking at the Q3 2016 Microsoft earnings, investors need to 1) look past the headline numbers and 2) keep in mind that Microsoft is in the midst of a huge transition that will not always be smooth.

Another issue was an unexpectedly higher tax rate that shaved several cents from MSFT's earnings per share. The EPS would have been $0.66 without that anomaly – above Wall Street's forecast.

Then there's the strong dollar, which has weighed down the earnings of just about every U.S. multinational corporation. In Microsoft's "constant currency" calculations, the impact of the strong U.S. dollar on EPS was $0.06 a share.

Taken with the tax rate impact, you could argue that practically speaking, Microsoft's earnings beat expectations.

Likewise, the perception that the growth of Microsoft's cloud businesses has slowed dangerously isn't quite right, either…

The Microsoft Cloud Transition Is on Track

The way Microsoft groups its businesses can make it difficult to sort out how well some of them are doing.

So while the Intelligent Cloud segment grew revenue by only 3%, revenue from its Azure services grew 120%. Azure is second only to Amazon.com Inc.'s (Nasdaq: AMZN) Amazon Web Services (AWS) in the rapidly growing cloud platform market.

Similarly, as Microsoft moves Office to a subscription-based model, it's seeing sales of Office decline while subscriptions ramp up. Office 365 picked up another 1.6 million subscribers in the quarter, and a 79% increase in just one year. And Office 365 commercial revenue grew 63% in constant currency.

All this isn't to say Microsoft hasn't hit a few bumps. And there may be more. The reinvention of a company the size of Microsoft is a tremendous undertaking that will go on for several years.

But the long-term strategy is working, and will be reflected in the MSFT stock price eventually.

Which brings us back to the drop in the Microsoft stock price.

Before today, MSFT stock had risen 36% over the previous 12 months. That was limiting gains for new investors, given a one-year Microsoft stock price target in the mid-$60s.

Now that Microsoft stock is trading at about $52, hitting that target represents a gain of about 25%. And in another year or so, MSFT stock could reach $70 – a 34% gain from the new, lower price.

Money Morning Director of Technology & Venture Capital Michael A. Robinson has been bullish on Microsoft stock for over a year. In the video below, he explains why he likes MSFT in 2016…

Apple Dividend Forecast: Most expect Apple to announce a dividend increase when it reports its Q2 earnings, as it has done the past several years. The only suspense lies in how big the increase will be. And while past Apple dividend increases have been generous, there's good reason to expect a major surprise this year…