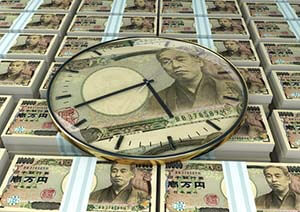 Dow Jones Industrial Average News, 4/25/2016: With the U.S. Federal Reserve prepared to do nothing this week with interest rates, the U.S. dollar took a tumble on Monday.

It seems that no matter what anyone says about monetary policy, what the Federal Reserve does is what truly drives the markets. Perhaps everyone is waking up to the truth that our Chief Investment Strategist Keith Fitz-Gerald recently outlined.

Roughly 93% of all stock market movement since the Great Recession has been driven by the Federal Reserve's policy decisions.

Dow Jones futures projected a 42-point decline as oil prices slid and traders prepared for a busy week of earnings statements. Investors are also anxiously awaiting an update from the Federal Reserve on the possibility of raising interest rates. Though the Fed is extremely unlikely to increase interest rates this month, traders are curious of the timing of the Fed's next action, particularly in the wake of recent weakness in the nation's manufacturing sector.