Apple stock is bracing for the impact of an earnings report tomorrow (Tuesday) that nearly everyone expects will be the worst for the company in years.

The year-over-year decline in revenue would be the first for Apple since 2003, ending an amazing streak of 51 straight quarters of growth.

The root cause for the decline, of course, is slowing iPhone sales. The iPhone accounts for about two-thirds of Apple's revenue and profits.

How This First-Ever Decline Weighs on Apple Stock

The consensus forecast is for Q2 iPhone sales of 217 million, while Apple sold 231 million iPhones in the same quarter a year ago. This also would be the first year-over-year decline in iPhone sales. 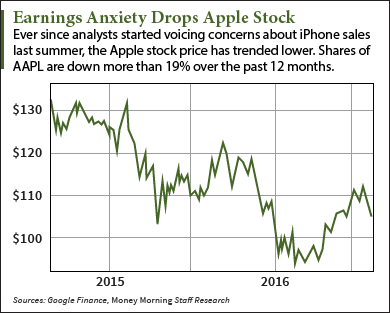 Investor anxiety over just how bad the Apple Q2 earnings will be tomorrow has eaten about 6% from the Apple stock price since April 14, pushing it down to about $105. And concerns about iPhone sales date back to the middle of last year, largely explaining why AAPL stock is down more than 19% over the past 12 months.

The negative sentiment on Apple stock isn't likely to reverse in the near term. In addition to a sour Q2 earnings report, the company has faced skepticism toward its other recent moves.

Many pundits and analysts have suggested the Apple Watch a "flop," for example, even though Apple has yet to release actual sales numbers for the device. They've been similarly dismissive of the chances of the new iPhone 5SE, which has a smaller 4-inch display, to re-energize iPhone sales.

But despite the current mood of gloom, Apple stock is a buy. Here's why the AAPL stock price is nowhere near a peak yet…

Why AAPL Stock Is a Buy Right Now

First of all, let me point out that nearly a year of negative sentiment and weeks of agonizing over Q2 earnings have a silver lining. By now, pretty much all of the downside from the Apple Q2 earnings is priced into Apple stock.

When Apple reports earnings tomorrow, the AAPL stock price won't react much unless it reports numbers much worse than expected, which is very unlikely.

Given its decline over the past year, Apple stock is bargain-priced right now. Even with the negativity, the consensus one-year AAPL stock price target is $134. That's a 27% gain – and understates how high Apple stock can go over the next few years.

What's important to understand about Apple's Q2 earnings is the perfect storm of issues surrounding the iPhone:

When the iPhone 7 — a major upgrade — arrives in the fall, it will face fewer headwinds. It may not enjoy the numbers the iPhone 6 had in 2015, but it will fare better than the iPhone 6S.

Plus, Apple's other iPhone initiatives should start to bear fruit. The iPhone Upgrade Program introduced last year will encourage more upgrades to the iPhone 7. It will provide Apple with a pipeline of recent-model iPhones it can sell at a discount in places like China and India, along with the low-cost iPhone 5SE.

A Stealth Catalyst for the Apple Stock Price

Improved iPhone sales later this year will help boost Apple earnings in fiscal 2017, but there's no escaping that the company has just about exhausted the smartphone as a source of growth.

But Apple quietly has been building up a piece of its business that will be able to pick up some of the slack over the next few years – software and services.

Apple's vertically integrated ecosystem has mostly been about devices and the operating system that runs them, but it has gradually added more services like Apple Pay and Apple Music as well as sales of apps, music, and video.

"In addition to our focus on Apple's iPhone installed base as a latent driver for future iPhone upgrades, we are also focused on Apple's ability to drive increased services revenue through its expanded installed base," Stifel Nicolaus analyst Aaron Rakers said in an April 20 note.

Of particular interest to investors is that these services businesses carry even fatter margins than Apple's device businesses. Piper Jaffray analyst Gene Munster estimates that while gross on iTunes sales are about even with device margins in the 30% to 40% range, margins on Apple Care are 70% and on App Store sales are as high as 90% to 95%.

And don't sell the Apple Watch short, either. It may yet become a major moneymaker for Apple. Despite the badmouthing it's gotten, the Apple Watch is estimated to have sold 12 million units in its first year – double the number of iPhones sold in its debut year.

All of these forces will start to push Apple earnings higher in FY 2017, which will reverse sentiment and drive the AAPL stock price upward.

Given these catalysts, it's not hard to see Apple stock reaching $150 within two years.

An Apple Dividend Surprise: Apple will almost certainly announce a dividend increase when it reports its Q2 earnings, as has been its custom in recent years. What we don't know, however, is how big this year's dividend hike will be. Apple typically has been fairly generous, but this year there's reason to expect a bigger-than-usual increase…