The Bitcoin price is up 12% in the month of April and has more than doubled over the past 12 months. 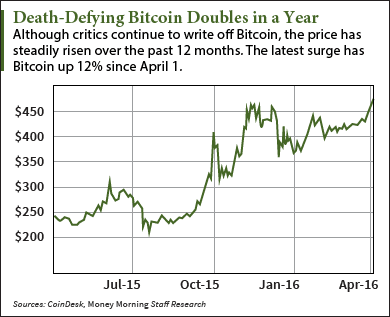 Contrast the jump in the price of Bitcoin with just about any other investment over the past 12 months; it's not even close.

Of course, many investors still don't trust Bitcoin. It hasn't stood the test of time like gold, and for most of its existence has been very volatile.

But the Bitcoin price has become far more stable over the past year as acceptance of the digital currency has grown. Even the stuffy Wall Street Journal ran a story earlier this month with the headline "Is Bitcoin Becoming More Stable Than Gold?"

And while Bitcoin's critics remain convinced that it's doomed, adoption of the technology continues to march forward.

Over the past year the number of Bitcoin wallets has nearly doubled. Transaction volume is up 32%. And venture capital keeps pouring in.

Just since the beginning of 2016, venture capitalists have plowed $191 million into Bitcoin startups. At that rate, VC investing in Bitcoin will reach $573 million in 2016, topping the $490 million invested last year.

So Bitcoin isn't going away, which is one reason why the Bitcoin price is again on the rise.

But there are several other catalysts at work on the price of Bitcoin right now.

Remember those Bitcoin obits I mentioned? Most of those written over the past six months resulted from the "civil war" the Bitcoin community was having over how to scale the technology to accommodate more transactions.

You see, Bitcoin's "blockchain" technology has nearly reached capacity, with the number of transactions nearly filling the 1-megabyte "blocks" of data that are created by the Bitcoin miners every 10 minutes or so.

With the Bitcoin community torn over a solution, many thought the digital currency had reached a dead end.

But last week an alternative solution to the block size issue arrived – "segregated witness," or segwit for short.

Without getting too technical, segwit moves a certain portion of the data to a place where it won't be counted in a block's 1-megabtye limit. The Bitcoin developers behind segwit believe it could allow for as many as four times more transactions per block.

Better still, the segwit code is a "soft fork," which means Bitcoin users don't need to download new software to benefit from it.

The segwit solution, while not a permanent answer to the scalability of Bitcoin, buys time for the core Bitcoin developers to work on more robust approaches.

Why the Price of Bitcoin Is Headed Much Higher

The reward that Bitcoin miners get for solving a block is currently 25 bitcoins. But the system is designed to cut the reward in half at regular intervals, with the next "halving" due July 11.

On that date, the mining reward drops to 12.5 bitcoins, which will reduce the supply of Bitcoins coming into the exchanges. Less supply plus the same demand will equal higher Bitcoin prices.

And as time goes on, demand will continue to rise. As all those Bitcoin startups mature, and people warm to the many use cases of Bitcoin, their value will increase.

Two Wall Street analysts, Needham & Co. and Wedbush Securities, have calculated what Bitcoin will need to be worth in the coming years as it gets integrated into the financial system. They see Bitcoin gaining traction as a payment mechanism and as an investing safe haven akin to gold.

That's why one recent Bitcoin price prediction – from Needham & Co. – has the digital currency quadrupling to $1,896 by 2020.

Another Wall Street firm, Wedbush Securities, projected five years farther out and came up with a Bitcoin price prediction of $17,473, a 3,640% increase from today's price.

In fact, Needham thinks Bitcoin is severely undervalued now. In a report released last month, Needham calculated the present value of Bitcoin at $655. That's 40% higher than the current Bitcoin price of $467, even with the recent increase.

In short, there's a lot of upward pressure on the Bitcoin price right now, and it's only going to intensify. Look for the price of Bitcoin to crack the $500 barrier over the next few weeks.

If you go by technical analysis, Bitcoin is breaking out of what's known as a "bullish pennant" pattern right now. If the Bitcoin price follows that pattern, we'll see it break $600 before it takes a breather.

The Bottom Line: The Bitcoin price has more than doubled over the past year even as its critics have declared the digital currency dead over and over. What they don't realize is that Bitcoin has multiple catalysts pushing it higher right now. In fact, the run we've seen in the price of Bitcoin lately is just a hint of bigger gains to come. Expect $500 by summer, and $2,000 five years from now.

Don't Fear Ethereum: When shoveling dirt on Bitcoin, critics often point to rival cryptocurrencies like Ethereum. The thinking is that newer digital currencies will overtake Bitcoin, rendering it worthless.  But a close look at Ethereum shows why this isn't true. Here's what the critics are getting wrong…

How can I invest in Bitcoin?

We put together a guide to help answer this question: http://moneymorning.com/active-premiums/how-to-buy-bitcoins/