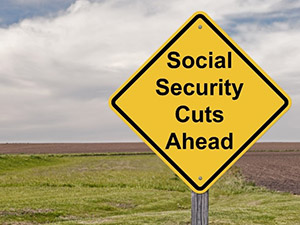 Famed economist Laurence Kotlikoff had a hand in Congress' decision to make the sweeping Social Security cuts about to go into effect.

He's not thrilled about his unintended participation, either. "That doesn't make me feel happy," he said, according to an article in The Chicago Tribune yesterday. "Or proud."

You see, Kotlikoff and two colleagues -- Philip Moeller and Paul Solman -- co-authored "Get What's Yours: The Secrets to Maxing Out Your Social Security" in 2015. Their publisher, Simon & Schuster, wasn't sure the book would take off, so at first they only printed 10,000 copies.

But take off it did. There are now more than 300,000 copies in print, making it one of the best-selling business books of 2015, reported The Chicago Tribune.

Unfortunately, this mass success caught the attention of the U.S. government - chiefly members of Congress, who were meanwhile working on a bipartisan budget deal that would practically rewrite the current Social Security code.

And so they drafted a bill to have the loopholes nixed from the books.

Now the changes go into effect on Sunday.

Here's a look at what the book revealed about the Social Security code...

Overall, Kotlikoff's book urges readers to be patient. He notes that Social Security rewards Americans who wait as long as possible to claim their benefits.

So for instance, by claiming at age 70, the book states, rather than at 62, retirees can boost their inflation-adjusted income by up to 76%.

"Get What's Yours" also revealed how to take advantage of one perk in the SS code that ends this month - the "file and suspend" clause. This strategy lets Americans receive spousal benefits based on their husband's or wife's work history, without tapping their own benefits early. The provision has meant an extra $10,000 to $60,000 in Social Security benefits per year for some folks, reported The New York Times on Oct. 30, 2015. 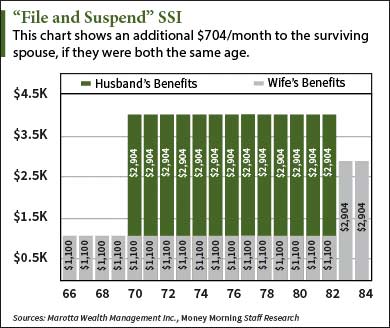 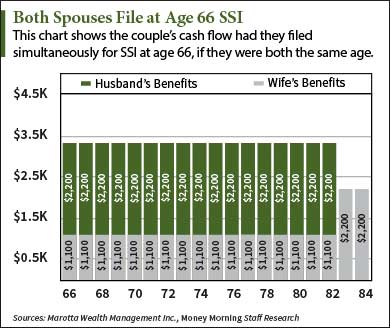 These charts compare a couple's Social Security benefits with and without the "file and suspend" strategy.

Another clause on the chopping block thanks to "Get What's Yours" is a strategy that lets retirees change their minds about when to file. With this loophole, they can delay taking their benefits and then, if they get sick or have an emergency, get their past benefits paid in a lump sum. The lump-sum bonus is a gift available to people who reach what's known as Social Security's Full Retirement Age without having begun collecting benefits. (Full Retirement Age, in 2015, is 66 if you're between age 61 and 72; 67 for those age 55 or younger; and somewhere in between 66 and 67 for people age 56 to 60.)

Kotlikoff isn't proud or happy that his book incited major changes to the U.S. Social Security code. In fact, he's appalled that the bipartisan bill was drafted without debate, hearings, or full consideration of the full effects the legislation will have.

Old Man Behind Bars: Former high-rolling money manager Stephen Walsh will probably die in jail. That's because he swindled investors out of $554 million. Here's a look at what the scheming financial advisor did with his trusting clients' funds...