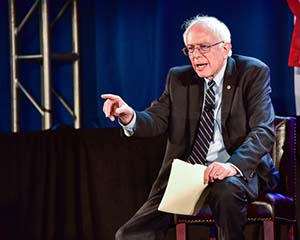 Vermont Sen. Bernie Sanders had a crushing defeat in the five election 2016 primaries on Tuesday, April 26.

Sanders seems hopeful he can sway the allegiance of these superdelegates before the convention in July. It's a bold plan for sure. But Sanders has vowed he'll fight all the way until the convention.

If he pulls off his strategy, many voters wonder what a Sanders administration would look like.

In particular, many people are asking who Bernie Sanders' vice president might be.

While Sanders said he doesn't want to speculate about who his running mate will be, he has dropped a few names.

Here's who we think Bernie Sanders' top five vice presidential picks might be...

The Top 5 Candidates to Be Named Bernie Sanders' Vice President

1. Massachusetts Sen. Elizabeth Warren: Although a freshman senator, Warren is already building a reputation among Democratic circles as a fighter for the working class, a staunch critic of Wall Street, and an opponent of corporate influence in elections. She's also a member of the Senate Banking Committee.

At a Banking committee hearing on Feb. 14, 2013, Warren challenged the bailout-induced haphazardness of Wall Street.

"I'm really concerned that 'too big to fail' has become 'too big for trial,'' she said.

Videos of Warren's criticism of Wall Street generated millions of views on YouTube.

Warren questions financial regulators why Wall Street executives that have broken the law haven't been prosecuted.

Warren has also been an outspoken critic of the two leading Republican candidates, Ted Cruz and Donald Trump.

She's well-equipped to be Sanders' attack dog and surrogate on the campaign trail. And she compliments Sanders' liberal platform well.

2. Vice President Joe Biden: It's uncommon for a vice president to serve three terms, but there are no laws against it.

Having been at the right hand of the president for almost eight years now, Biden knows a thing or two about how the federal government works. He's helped President Obama with many projects involving the different branches and agencies of government.

For example, Biden was instrumental in carrying out the Recovery Act, which was seen as one of the greatest accomplishments of the Obama administration. He oversaw the government's nearly trillion-dollar stimulus package without any serious pushbacks or controversies.

Biden could offer his eight years of experience to Sanders, and his moderate political views could balance out Sanders' far-left platform.

3. Minnesota Sen. Amy Klobuchar: As a two-term Senator, Klobuchar has plenty of experience to bring to a Sanders' administration. She's well-respected in the Senate and supports many features of Sanders' main platform.

Klobuchar is a critic of free trade, which Sanders has also been skeptical about. She is also in favor of raising the minimum wage and supports immigration reform.

Like Warren, Klobuchar would give Sanders an edge among women, whom he already polls well with.

4. HUD Secretary Julian Castro: Castro is on the top of the list for Latino running mates. Although he isn't well-known, Castro has made a mark for himself as the Housing and Urban Development secretary. For the most part, Castro's colleagues consider him a good HUD secretary simply because he hasn't made any mistakes so far, according to Politico.

While Castro has been cozy with the Clinton camp -- and has personally been mentored by Bill Clinton -- he may still be a viable pick for Sanders.

Castro's popularity with Hispanics would be a boon for Sanders in his bid for the minority vote.

5. Minnesota Rep. Keith Ellison: Ellison was the second member of Congress to endorse Sanders. He is the co-chairman of the Congressional Progressive Caucus, which Sanders helped found in 1991.

In the past, Sanders and Ellison worked together to introduce bills calling for hiking the minimum wage and banning private prisons, according to MSNBC.

Since they already have a strong rapport and work well together, a Sanders/Ellison ticket could be just what Sanders envisions for a reformed, progressive America.

Who's Afraid of Donald Trump? A powerful group of men joined together on Jekyll Island. Their goal was to secretly work their influence over the American people. And to stop the progress of Donald Trump's presidential campaign... at all costs...