Investors could easily be misled on UPS stock.

Some in the financial media have been pushing the idea that United Parcel Service Inc. (NYSE: UPS) faces a serious threat from Amazon.com Inc.'s (Nasdaq: AMZN) moves to do more of its own deliveries.

But that thinking suffers from a shallow interpretation of what's really happening.

"Don't let Amazon's moves in shipping 'psych you out," said Money Morning Director of Technology & Venture Capital Michael A. Robinson. "UPS stock is a great way to play the e-commerce boom and the global retail market for the long haul – no matter what Amazon does."

To understand why Robinson likes United Parcel Service stock so much, let's take a closer look at "Big Brown"…

UPS was founded by a 19-year-old by the name of James E. Casey in Seattle, Wash., in 1907. Casey had worked for other messenger services, but realized he could do it better.

So Casey borrowed $100 and hired several other teenagers to help to create the American Messenger Service. His insistence on customer courtesy, reliability, 24-hour service, and low rates led to early success.

Technological disruption arrived soon after in the form of the telephone and automobile, which reduced the need for messengers and rendered obsolete the company's on-foot deliveries.

But it adapted, first by using motorcycles then automobiles. It also shifted strategies, focusing on delivering packages for local businesses, particularly department stores. The name was changed to Merchants Parcel Delivery.

In 1916, automobile expert Charlie Soderstrom joined the firm, helping it expand its fleet. It was Soderstrom who suggested the vehicles be painted dark brown, supposedly to make the inevitable dirt less noticeable.

By 1919, the business expanded to Los Angeles, changing its name to United Parcel Service. It was among the first to offer "common carrier" service, which included such services as daily collection calls, additional delivery attempts, and return of undeliverable packages. By 1927, UPS was serving all major West Coast cities. However, it wasn't until 1975 that service was extended throughout the United States due to restrictive interstate commerce laws.

Meanwhile, UPS started to broaden its reach beyond the United States, first with service to Toronto in 1975, then to Germany in 1976. The international expansion accelerated in the 1980s.

What You Need to Know About UPS Stock

Wall Street has treated UPS stock somewhat unfairly over the past year. Over the past 12 months, the UPS stock price is up just 6% despite a solid and consistent earnings performance. 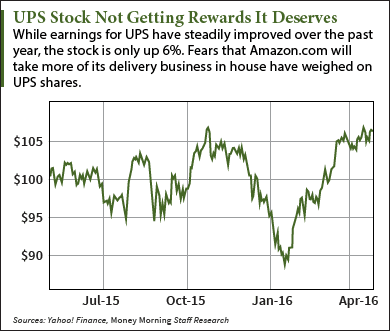 In addition to suffering from not being a particularly sexy stock, UPS lately has had to contend with rising worries over Amazon's plans to build its own delivery network.

It's not unfounded – in March, Amazon announced a deal with Air Transport Services Group Inc. (Nasdaq: ATSG) to lease 20 jumbo delivery jets, and we know Amazon has been testing delivery by drones.

Why UPS Stock Is a Buy

In reality, UPS has little to fear from Amazon.

First of all, UPS has a huge global delivery network that includes 1,800 facilities, some 650 aircraft, and more than 100,000 delivery vehicles. By comparison, what Amazon is doing in the delivery sphere is baby steps.

Also, according to Merrill Lynch, Amazon represents just 6% of UPS' U.S. deliveries. So even if UPS does lose some of its Amazon business (and management is already factoring that into its forecasts), it won't be devastating.

But more to the point, UPS is already replacing that business – and then some.

"The real story here is the global market, which is growing faster and making even more money than UPS' domestic market," Robinson said. "Back in 2000, Big Brown earned just 6% of its profits outside the United States. Today, that figure is more than four times higher – 28% and rising fast."

The company projects that its international business will grow 35% a year through 2018. Plus – despite any shifts in Amazon's business — UPS expects its online retail shipment volume to grow 21% a year over the next five years.

Growth like that will more than make up for any business lost to Amazon's adjustments to its delivery strategy.

UPS is also trimming costs with technology, having invested in a system that allows drivers to adjust their planned routes midday. Over the course of a year, just one less mile driven per day per driver will save UPS $50 million.

Wall Street's inability to see the true value in UPS stock means you can snap it up before they get wise – and drive up the price.

UPS stock is a long-term play to be sure, but it's set up well for healthy growth for years to come. Meanwhile, investors can collect the UPS dividend yield of 2.93%. Since its 1999 IPO, the UPS dividend has on average grown 10% a year.

"Remember, UPS has a 108-year head start on Amazon," Robinson said. "And this is a firm that truly rewards investors."

In Case You Missed It: Our last Pick of the Week is an e-commerce company that rivals even Amazon. The stock has only been trading for two years, but has suffered a hangover from the excess hype surrounding its IPO. Because of that, a lot of investors have written this stock off prematurely. Here's why you should consider adding this play on one of the world's fastest-growing markets to your portfolio…