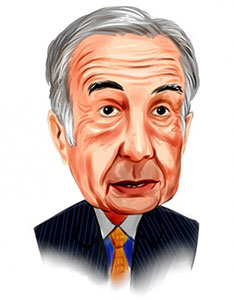 The gut punch Carl Icahn delivered to Apple stock on Thursday makes it abundantly clear why activist investors can be hazardous to your portfolio.

When former Apple Inc. (Nasdaq: AAPL) cheerleader Icahn announced in a CNBC interview that he had unloaded all 45.8 million of his remaining shares, AAPL stock dipped 2.5%.

And that was on top of an awful week for Apple stock that had already sheared 8% from the AAPL stock price. As of midday Friday, Apple stock was trading near $93.

It was a great trade for Carl Icahn, who claimed on CNBC that he made a profit of approximately $2 billion. This is why he's one of the most famous activist investors in the world.

But the episode illustrates why the Carl Icahns of the world represent a threat to retail investors like you and me...

How Carl Icahn and His Ilk Can Cost You

This is especially true in Icahn's case, because his reputation gives stock-moving power to his public statements.

The trouble comes when ordinary investors incorporate the statements of heavyweights like Icahn into their investing decisions.

"Studies show that raider activists work their magic over the short term, typically anything from a period of months to right about three years. What everyone needs to understand is that they are usually not aligned with long-term value, let alone your interests as an individual investor," said Money Morning Chief Investment Strategist Keith Fitz-Gerald.

While activist investors may buy a stock because they truly believe it's undervalued - or short it because they believe it's truly a dog - it's vital to remember they have a vested interest in moving a stock in the direction they want it to go.

To see how tricky this can be, let's dig into the details of how Carl Icahn created his Apple position, what he did to drive the Apple stock price higher, and the real reasons he sold when he did...

Apple Stock Was a Target Ripe for Carl Icahn

Icahn started to accumulate Apple stock back in August of 2013. That alone was a smart move, as the AAPL stock price had tumbled about 40% from the fall of 2012 to the spring of 2013.

Icahn continued to make large purchases into 2014, at one point buying $1.65 billion worth of Apple stock in one swoop. He eventually accumulated about 53 million shares.

The day Icahn first announced he was buying Apple, the stock spiked about 5%. Initially, he agitated for a stock buyback program. Although he lost a proxy fight in 2013, Apple did launch such a program along with a dividend increase that year.

After that victory, Icahn embarked on a campaign to drive up the AAPL stock price by making the case that it was drastically undervalued.

An open letter to Tim Cook in October 2014 praised Cook's leadership and Apple's prospects, not just for the iPhone, but for the iPad, the Mac, the as-yet-unreleased Apple Watch, and even a mythical Apple UltraHD television.

The real point of the letter, however, was to publicize an outlandish $203 Apple stock price target. At the time, AAPL stock was trading at just over $100 a share. The most bullish analyst Apple stock target price was just $139. Suspicious, no?

Icahn's strategy was obvious. And if there were any doubt, he wrote another letter to Cook in May 2015. Like the October letter, it heaped praise on Cook and Apple's products.

The May letter also included a detailed valuation of Apple stock. But this time, Icahn ludicrously concluded that AAPL shares were worth - ta-da! - $240 a share.

"Corporate activists frequently take their case to the public by 'talking up their book' - a derogatory Wall Street term meaning they make public commentary on things intended to increase the value of their own holdings," Fitz-Gerald said.

Apple stock was then trading near its peak, at about $130 a share. Icahn was seeking to milk the trade just a bit more by luring gullible investors into driving the AAPL stock price still higher.

As it tried to recover in the fall, Icahn tried one last time to wring some extra value out of his trade.

"Apple, even in a bear market - it may get hurt, it may go down - but I think Apple is still ridiculously underpriced," Icahn said in a Sept. 30 CNBC interview. He added that Apple was "misunderstood by most of Wall Street" and that he was "seriously considering" buying more shares of Apple.

But by then the narrative that the iPhone 6S was failing to sell as well as the iPhone 6 had already taken hold, in addition to concerns about sales in China. Not even Carl Icahn could prop up AAPL stock.

At some point in April, as AAPL stock recovered from the general December-January sell-off, Icahn decided to cash out. Apparently Apple stock isn't worth $240 a share, after all, eh, Carl?

When Icahn returned to CNBC to confess that he'd sold his entire remaining position in Apple stock, the reason he gave was economic weakness in China. It's unlikely he believes it.

Apple's horrible earnings report Monday, in which sales in China declined 26%, gives Icahn cover. But he knows this is a bump in the road and that iPhone sales will almost certainly grow in 2017.

"I simply think he couldn't get what he wanted: more leverage, a short-term boost in share prices based on the financial engineering that would have come with a more aggressive buyback program, and the opportunity for even more ginormous profits. So he hit the road like a five year old taking his toys out of the sandbox because the other kids won't play with him," Fitz-Gerald said.

But while Icahn's strategy was a stunning success, it's not something retail investors can emulate.

"Corporate activists are not in it because they believe in the goodness of their actions. They're in it for the profits - pure and simple," Fitz-Gerald said.

As for Apple stock, it's not dead yet. In addition to better days for the iPhone, the company will benefit from its powerful ecosystem and ability to exploit new tech developments, such as the Internet of Things.

With the Apple stock price at about $93, Fitz-Gerald sees a terrific buying opportunity.

"My back of the envelope calculations suggest that Apple could maintain current valuations just by repurchasing shares and maintaining current profit margins," Fitz-Gerald said. "My take is that Apple is still worth $200 a share."

The Bottom Line: Carl Icahn's exploitation of Apple stock for a huge personal gain shows why retail investors need to be careful about how much weight they give to the public opinions of activist investors. It's important to always bear in mind that they're out to maximize their own profit and don't necessarily act in the best interests of a targeted company - no matter what they say.

How to Handle the Activists: For retail investors, it's getting harder and harder to avoid activist investors and the turmoil they can bring to a stock. That's because in recent years the activists like Carl Icahn have been going after bigger and bigger targets. Apple is just one example. Other activists have gone after such names as General Electric and Procter & Gamble. Here's what to do when a stock you own lands on the radar of an activist investor...

I'm sure Icahn will never be trusted again, if he ever was to start with. I have no idea why billionaires at that age still need more money. It's called serious greed to the tenth degree. Icahn is a slimeball and should share a cell with Bernie Madoff.