Wall Street is playing a game with your money.

And just about everyone on the Street is in on it... Analysts, financial media, data compilers, CEOs are all working in concert to obscure the information you need to make the most fundamentally important investment decision of all: to buy or to sell.

The game is "hide the earnings," and, naturally, its sole purpose is to make corporate earnings look better (often a lot better) than they actually are. After all, central banks, macro events, and existential crises all impact share prices, but it's earnings that really drive them.

If it all sounds like a con, well... it is. A perfectly legal one, pulled off with "creative accounting" that puts dubious non-GAAP earnings ahead of consistent, reliable generally accepted accounting principles-derived earnings.

So today, I'm going to name names and tell you about one of the biggest culprits this earnings season.

And, since it's very likely you own these shares, I'm going to show you a really simple calculation you can use to get to the truth, because you certainly can't expect it from Wall Street.

The Wide Gap Between GAAP and Non-GAAP

Last year is just another example of the disparity between real and unreal earnings numbers.  According to The Wall Street Journal, headline or pro-forma earnings for companies in the S&P 500 in 2015 were 25% higher than GAAP earnings. That's the biggest disparity since 2008. A CNBC analysis found a similar gap in 2015 earnings.

In February 2016, regarding 2015 earnings, FactSet (which is practically the only data compiler worth listening to) reported that:

If you just follow the yellow brick road, paved for us by the likes of Bank of America Merrill Lynch, you're probably feeling positive about the earnings reports coming at us like a fire hose this quarter.

With the conclusion of Week 2, 133 companies representing 40% of S&P 500 earnings have reported. Overall for the S&P 500, 67% of companies have beaten on EPS, 57% have beaten on sales, and 44% have beaten on both-an improvement from the prior week, and much better than we saw this time last quarter, when just one-fourth of companies beat on both EPS and sales.

Of course there are a lot of "beats" this quarter. Analysts have been furiously ratcheting down their earnings estimates since January, while company accountants, with executives standing tall over them, have been making "adjustments" right and left in their earnings and expense columns.

And our often asleep at the wheel regulators are starting to raise concerns that all this gimmickry is going to eventually cause trouble in the markets...

It's So Bad, Even Regulators Are Starting to Notice

The SEC is worried about how investors are being misled.

Last month, U.S. Securities and Exchange Commission Chair Mary Jo White, addressing a U.S. Chamber of Commerce audience, told guests, "We have a lot of concern about the use of these measures and whether they may be confusing to investors and analysts."

She shouldn't worry they're confusing to analysts - that's bunk. Analysts know the game.

And SEC chief accountant James Schnurr criticized the rampant use of non-GAAP measures in a recent speech, saying, "SEC staff has observed a significant and, in some respects, troubling increase ... in the use of, and nature of adjustments within, non-GAAP measures."  Schnurr additionally stated that non-GAAP measures should "supplement ... not supplant" the information in the financial statements.

Even Warren Buffett's been chiding non-GAAP earnings, noting the difference between GAAP and non-GAAP results is challenging for the average investor to interpret, and that they can't count on analysts to clear it up because executives and some analysts are "guilty of propagating misleading numbers that can deceive investors."

I want to illustrate the distinct difference between GAAP numbers and Non-GAAP numbers with two recent, real world examples.

You may have noticed that Apple Inc.'s (Nasdaq: AAPL) earnings grossly disappointed this week - the company posted its first quarter-to-quarter revenue decline since 2003 - and the stock got beaten down. 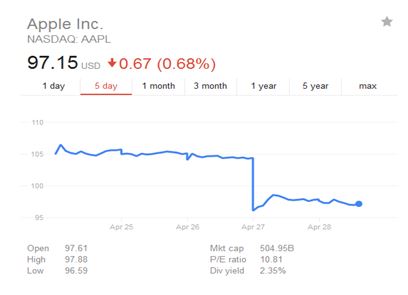 The company released earnings after the bell on Wednesday, when the stock closed at $104.30. On Thursday, the stock opened 8% lower.

It's disappointing, even troubling - since the company didn't forecast any growth, and in fact lowered their guidance for Q3 - but Apple doesn't report non-GAAP earnings, they only report earnings derived from generally accepted accounting principles.

While the truth hurt them, at least their investors know how the company's really doing and can make investment decisions accordingly.

Zuckerberg & Co. trumpeted their non-GAAP earnings on Wednesday after the close, and the stock took off like a rocket. 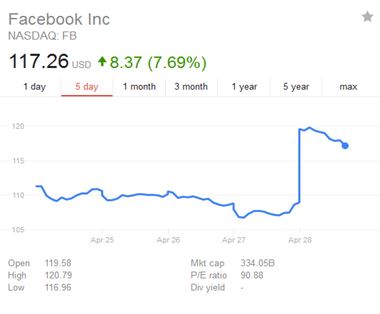 While the immediate focus was on the $5.382 billion in revenue Facebook posted for the quarter versus last year's revenue of $3.543, under the hood, non-GAAP numbers rolled out to the public masked less robust GAAP metrics.

That's what good non-GAAP numbers can do, especially in a tough market looking for companies that clobber consensus estimates.

Still, Facebook is making huge strides no matter how they tell the tale of their earnings, so perhaps the stock would have gone up anyway.

But would it have gone up as much as it did? Maybe not.

How to Protect Your Investments from This Game

So with all these different numbers, different accounting practices, and different reporting methods, what's an investor to do?

My advice: When a company announces earnings, pay close attention. Read the reports, listen to the conference calls, and pay as much attention to the numbers they aren't talking about.

Here's a quick checklist that you can use to help you assess viability of non-GAAP earnings numbers:

Additionally, I always look at all numbers sequentially.

For example, I look at changes in top-line revenue sequentially over the past four quarters to a year ago, because how a company is doing in sales and generating revenue is hard to mess with.

If you look at all the components that make up earnings numbers through the sequential prism, it's a lot easier to pick up anomalies anywhere they might otherwise be missed if that quarter's numbers are just compared to the year ago quarter.

At the end of this earnings season, I'll follow up with a complete breakdown of the highs and lows, the good, the bad, and the ugly stories that will give you the whole picture of 2016's first-quarter earnings and how to value the market.

If you can spot these shady corporate tricks... you can profit. Over the past 25 years, Michael Lewitt has developed a reliable system that helps him pick stocks that are going down. He watches for a series of telltale factors and market conditions that allow him to gauge the health of a company accurately and make profitable short recommendations for his readers. In this report, he gives you the tools to do what he does. Here's his detailed guide on how to spot toxic stocks, how to avoid them, and of course, how to play them and make a sizeable profit. Click here to read now, and to sign up for Michael's free, twice weekly Sure Money.

Thanks for the great analysis by Shah Gilani about the differences between GAAP and non-GAAP earnings, and how so many companies misuse these figures to hoodwink investors.

Thanks Shah Giliani on letting us know about GAAP. They are part of the corrpution in this country.Where are the SEC in these cases.Thanks again