The advent of "Software-as-a-Service," or SaaS, was a true inflection point of the ongoing Internet Revolution.

Workers no longer had to rely on running a program they had to install on the machines on their desks in front of them. Rather, a specialist vendor would manage the software and simply allow all employees to access that software from a remote central location: "the cloud."

This changed everything. Companies no longer had to deal with the myriad small hassles of software; they could tighten up operations and focus on the mission, rather than managing growing IT departments.
For investors, the benefits were no less profound. Companies that offered SaaS, like Alphabet Inc. (Nasdaq: GOOGL) and Cisco Systems Inc. (Nasdaq: CSCO), became must-have shares that returned triple digits to shareholders who got in before SaaS took off.

According to a study done by Emergent Research, 80% of small businesses will be using the cloud by 2020 for much of their operations. For the top seven cloud companies, the cloud represents about $18 billion of business annually in 2015, according to the go-to news source for tech professionals, the CIO Journal.

Global SaaS software revenue will reach more than $100 billion in 2016. According to Forbes, cloud-based service has a compounded annual growth rate (CAGR) of 24% through 2018. That's downright impressive growth given the soft nature of the global economy.

If you missed SaaS, don't worry. Because right now, we're at another inflection point, one that's going to move entire sectors forward that had once been stuck firmly in the (mid) 20th century. And because the gains are likely to be even bigger this time, I want to show you the best profit play for what's about to happen…

The Biggest Disruptor to Hit Power Since the Light Bulb

Software-as-a-Service was a rainmaker for companies and their shareholders, but energy as a service (EaaS) has the potential to completely change the staid energy industry.

You can forgive the energy sector for playing it close to the vest – being an energy provider is not a cheap task. A simple, modern coal-fired plant costs around $2 billion to build, and that doesn't include the costs of transmission and distribution of power.

But the demands of the Internet Age mean that electricity consumption is rising year after year. Some utilities and energy providers developed what they call a "negawatt" strategy.

Basically you either build to meet demand or lose the market… or figure out how to get more energy out of what you have online. The latter is the negawatt concept.

If you can find ways to save at the customer end, there is a big opportunity to use that wasted energy with another customer. A more energy-efficient refrigerator or water heater means money in the power producer's pocket.

In essence, technology has allowed energy companies to reverse-engineer their energy demand problems.
In other words, you don't start at supply, you start at demand.

At the beginning of the 21st century, there were a number of energy service companies (EsCos) that were involved in this new demand-side engineering. According to an article in Energy Manager Today, EsCos can save the energy consumed by 2 million households in a year, or about $4 billion in utilities bills.

The problem was, technology had yet to catch up to the concept. And utilities are notoriously suspicious of new technologies.

Their job is to provide reliable power, so any fancy new software that ends up with a glitch that shuts down part of a city is highly undesirable.

This has meant that the majority of players in this sector have willingly passed up the "innovation dividend," albeit in return for reliability.

Not for much longer…

Let Your Toaster Do the Talking

This year, a utility industry study reported that about 60% of outages are reported by customers to the utility. The utilities have no-real time feedback loop with customers; even now, most are just pushing power out and checking to see if it's going where it's supposed to.

And the grid is so old that Thomas Edison would be able to recognize it.

Smart devices – toasters, thermostats, lights, refrigerators – are also now becoming commonplace. If utilities could just talk to them, or at least listen to them, they could use that information to manage power supply better. And the corollary is also true; if people could see how they use electricity, they could also better manage their consumption.

This is the essence of EaaS.

That's a powerful idea for consumers, but it's absolutely revolutionary for the bottom lines of corporations and industrials – all of that "saved" power can be reallocated to other users without having to build new power plants for billions of dollars each.

This powerful new idea is being embraced by some conservative, risk-averse utilities that are moving quickly to establish footholds in EaaS.

Duke Energy Corp. (NYSE: DUK), for instance, which is one of the top energy producers on the East Coast, has an EaaS division. And on the West Coast, Edison International (NYSE: EIX) has announced that it's building EaaS programs as well.

Those moves are going to go a long way to boosting the profits and productivity of these classic utilities plays, but here's the thing…

The real winner of the EaaS stakes isn't a utility at all.

The Best EaaS Play on the Market Right Now

Verizon Communications Inc. (NYSE: VZ) is one of the largest telecoms and the largest wireless carrier in the United States, but it's also the newest and most promising entrant in the new EaaS field. 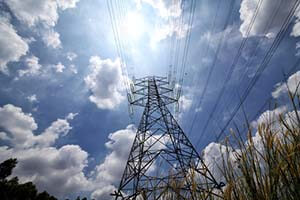 Now, admittedly, it sounds strange that a mega-cap telecom and wireless company should be a player in this new utility segment, but remember – Verizon was once one of the so-called "Baby Bells," Bell Atlantic, one of the largest wireline companies in the United States.

And that makes all the difference. Verizon is already connected, literally, to tens of millions of homes and counting, thanks to its high-speed fiber optic service, FiOS.

The company is holding its own in a tough game, competing for wireless retail customers against the likes of AT&T Inc. (NYSE: T) along with a slew of new, smaller providers with lower price points and comparable quality.

And while a soft economy isn't necessarily the best time for consumers looking to upgrade their Internet services or increase their bandwidth, that slowdown is more than offset by the crowds of "cable-cutters," consumers who are ditching their traditional cable connections for services like Verizon's FiOS.

Verizon is courting the commercial sector, showing that it can use its dominant market strength and penetration to adapt FiOS to EaaS, and work with smart homes and offices to help utilities and customers to manage power usage in real time.

From Verizon's own press release on the new service:

"Grid Wide allows electric utility companies to not only read smart meters remotely via Verizon's wireless network, but also to turn meters into 'power-quality sensors' that will help utilities better understand the quality of electricity they're delivering, which can ultimately translate into better service for end users."

Verizon can offer its EaaS and the utilities don't even have to swap out their meters. It will overlay on existing equipment. The notoriously cheap utilities will love that.

From a report by Lawrence Berkeley National Lab, there are potentially $70 billion to $115 billion in potential business opportunities with existing corporate, industrial, and institutional buildings that could be modernized with EaaS.

That is a massive market. According to the same report, the segment is worth about $7 billion right now. It's likely to double in the next four years, then really take off after that.

This kind of upside is rare in this economy.

You can be sure that Verizon sees the potential market and current market and wants to get to $70 billion a lot faster than analysts predict.

Verizon's first-quarter numbers were released recently and they continue to reflect its ability to maintain its leadership and pivot toward opportunity.

Earnings for the quarter were about 4% higher year over year, margins rose, and service revenue increased. Plus, smartphone adoption grew from 80% to 85%, which means more service opportunities and apps, like EaaS.

Aside from the solid earnings, now is a great time to buy because:

These are great reasons to buy, but perhaps the most compelling reason of all is the deafening silence on Wall Street… No one is even talking about about Verizon's move into EaaS, which of course means none of this growth potential is even priced in the stock at this point.

I recommend buying these shares now and holding them for the long term.

How a text message could help you double your money… Last Friday, at 2:19 p.m. Eastern time, we sent a text message to a small group of Money Morning Members. It alerted them to a rare pattern appearing in a normal stock. On Monday morning, folks who followed our instructions could have cashed out a 101.2% gain! And this signal just appeared again. We'll be sending another text message in the next 24 hours that contains details on another potential triple-digit winner. Click here to find out how you can get these notifications.

Verizon seems to be getting out of all landline business including Fios.
It has recently sold Fios in California, Florida, and Texas to Frontier.