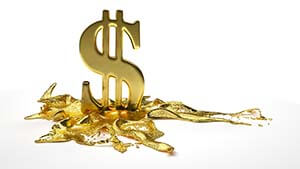 The present gold bull market has drawn more attention to investing in the yellow metal. Yet, many investors don't know much about the factors that affect the price of gold.

Unlike other investments, perceived value is a major factor in the gold price. There is a bit more to it than that, however.

Here are several of the top influencers on the price of gold.

What Influences the Price of Gold

Money Morning Resource Investing Specialist Peter Krauth gives readers regular insight into the "types" of money that move the price of gold. One of these is called "dumb money."

This refers to large speculators who trade gold in massive quantities. The latest report for gold from the Commitment of Traders (COT) indicates that these large speculators are continuing to bet on higher gold prices.

The other type of money that moves the price of gold is referred to as "smart money." This relates to the actions of commercial traders who are hedging against lower gold prices. These traders believe that gold is heading for a cooling-off period, and there has been an 11.5% surge in these trades over the past three months.

Other Influencers on the Price of Gold

Aside from the two influencers just mentioned, there are several other factors that influence gold prices. Among them are:

While a popular investment, gold remains a complicated asset to price. Unlike other investments that depend on fundamental financial data, the price of gold has both a psychological component and some economic factors that are tied to the overall marketplace. To learn more about how to buy gold, download our report: The Essential Guide to Buying Gold & Silver.

you forgot the Fed and how they play the futures market