In his speeches, Democratic presidential hopeful Bernie Sanders typically has sharp words when it comes to U.S. corporate taxes. He says U.S. companies don't pay their "fair share."
And a new study by the Government Accountability Office (GAO) - a study Sanders requested - backs up the claim. 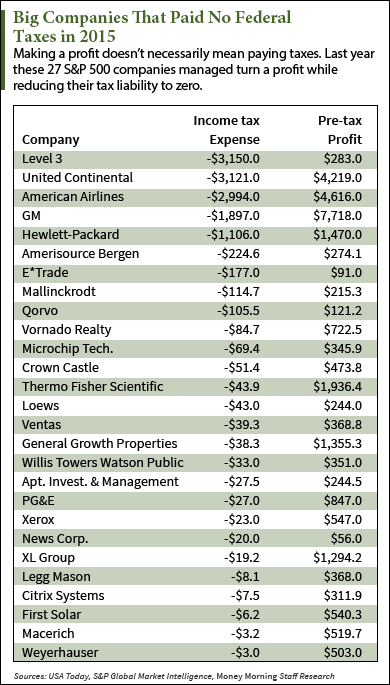 According to the GAO, two-thirds of all U.S. corporations actually paid no federal income tax whatsoever from 2006 to 2012. Among corporations with $10 million or more in assets, 42.3% paid no taxes.

It's not quite as bad as it sounds, since about half of those large companies earned no profits that could be taxed.

But among the large companies that did report a profit, the GAO says 19.5% paid nothing in U.S. corporate taxes, despite a statutory corporate tax rate of 35%.

GAO Study Is Gold for the Bernie Sanders Campaign

Sanders would seem to have a point. Overall, the GAO said the average effective tax rate for the 2008-2012 period was just 14% -- less than half the statutory rate.

Perhaps most galling are the thriving Standard & Poor's 500 companies that paid no taxes.

How do they get away with it? It's not all that hard with tax breaks like these...

How Corporate Taxes Can Fall to Zero

Corporations have lots of loopholes that help reduce their taxes. Here are a few of the top tricks they use:

And that list doesn't even include inversions, when a U.S. company buys or merges with a foreign company so it can move its headquarters to that country and take advantage of its lower corporate tax rate.

It does seem unfair. And Bernie Sanders isn't the only Washington politician complaining about the broken system for collecting U.S. corporate taxes. But here we run into the real problem...

It's ironic that corporate tax avoidance has been a popular punching bag in Washington for years.

The same politicians that bemoan corporate tax loopholes on the campaign trail are responsible for the laws that create those loopholes.

Corporations, for their part, really can't be blamed for exploiting the loopholes Washington creates. They have a fiduciary responsibility to shareholders to reduce their tax burden and maximize profits.

The politicians, instead of whining about it, could just fix it. After all, almost everyone - Democrats, Republicans, even many CEOs - agree the U.S. corporate tax code needs a major overhaul.

But apart from a lot of talk, nothing happens.

You see, while most U.S. corporations would love a reduction in the 35% corporate tax rate - one of the world's highest - they're not so keen on losing those tax breaks and loopholes. They're smart enough to realize that the loss of those loopholes, even with a corporate tax rate reduction to 25% or even 20%, would mean they'd owe more in taxes, not less.

So by making some strategic campaign contributions and using their army of K Street lobbyists, corporate America keeps the tax code just the way it is - full of loopholes.

And despite the complaining from lawmakers about the need for U.S. corporate tax reform, most would be loath to give up those loopholes.

You see, they like to use the tax code as a form of policy - rewarding industries they want to bolster or behavior they think will boost the economy. It's an awkward and inefficient way of implementing economic policy, but that's Washington for you.

That means you won't see reform of U.S. corporate taxes for a long time, if ever. But you will keep hearing about it in election years.

More on Bernie Sanders' Tax Proposals: One reason Sanders wants to address corporate tax reform is that he would need to wring more money out of U.S. businesses to help pay for his generous social programs, such as free healthcare and free college. In fact, Sanders has put forth a detailed tax plan on his web site, but it has one big, inescapable flaw...