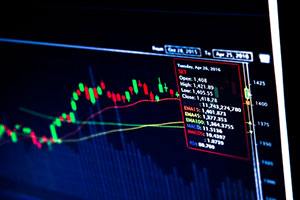 Dow Jones Industrial Average News, 5/4/16 – In recent days, investors' sentiments have been rattled by weakness in China's manufacturing sector, a surprise cut in interest rates by the Reserve Bank of Australia, and a downgrade in European growth expectations.

And today, the United States saw the slowest monthly private-sector job growth in three months, raising concerns about the health of the economy after last week's dismal GDP report. Combine this with the ongoing manufacturing recession that is plaguing the United State, and it's hard to get a clear picture of where the markets are heading next.

Shares of Tesla Motors Inc. (Nasdaq: TSLA) were off more than 4% as the company prepares to report its first-quarter earnings after the bell today. The report comes as the firm announces two top executives are departing the company ahead of its manufacturing build of the Tesla Model 3. Keep an eye out for earnings today, as sales are expected to have increased by roughly 50% over the quarter. [Update: TSLA stock added 3.7% after its earnings report.]

It was another brutal day for biotech stocks, with the iShares Nasdaq Biotechnology ETF (Nasdaq: IBB) falling roughly 3%. This is the ETF's seventh negative day in eight days. Shares of Gilead Sciences Inc. (Nasdaq: GILD) fell 1.8%, while Shire Plc. (Nasdaq ADR: SHPG) lost more than 4.1%. Finally, Valeant Pharmaceuticals International Inc. (NYSE: VRX) shed another 2.8% on news that the company may revise its guidance downward by its new management, according to BMO Capital. There are still plenty of other reasons to be bearish about VRX stock.

Brent crude prices were off more than 0.5% and continued their slide since Friday due to a combination of a stronger U.S. dollar, weak economic data in China, and concerns about the upcoming meeting among OPEC producers. Here's what you need to know right now about oil prices.

In terms of energy stocks, shares of Royal Dutch Shell Plc. (NYSE ADR: RDS-A) slipped more than 2.4% after the company announced that its earnings fell by 83% in the first quarter. Falling oil prices weighed down the firm's performance in the first quarter and forced the firm to reduce its capital expenditures by at least another 10% for 2016. Shares of Chevron Corp. (NYSE: CVX) – which have surged in recent months – dipped 0.7%, while Exxon Mobil Corp. (NYSE: XOM) fell by 0.2%.

On the economic front, the ADP employment report indicates that hiring in the private sector slipped in April to its lowest reading in three years. The report creates concerns about the pace of domestic job growth and places greater emphasis on Friday's unemployment report, set for release by the U.S. Labor Department. Economists widely expect that the unemployment rate will remain unchanged. But any rise may force the U.S. Federal Reserve to delay the timing of its next interest rate hike.