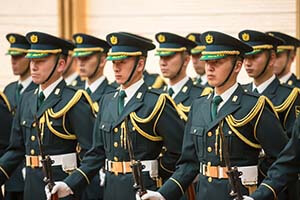 A guard of honor during a meeting of the President of Ukraine Petro Poroshenko and Prime Minister of Japan Shinzo Abe.

Japanese Prime Minister Shinzo Abe is taking his country down a war-like path of late. His controversial moves even have the people of Japan themselves protesting in force, urging Abe to uphold the nation's constitution...

Right now, Abe is on his Europe-Russia tour, during which he'll meet with Russian President Vladimir Putin on May 6 - against Washington's expressed wishes not to.

You see, the United States imposed sanctions on Russia last December until it agreed to observe cease-fire deals with Ukraine.

In February, President Barack Obama asked Abe to postpone his unofficial visit with Putin until after the Group of Seven summit is held in Japan's Ise-Shima region on May 26-27.

But the prime minister refused.

During their frowned-upon consultation this week, Putin and Abe are expected to address the territorial dispute surrounding the Kuril Islands -- four small islands that sit just off the northern tip of Japan that were initially captured by the Red Army during World War II.

But there are greater implications of Abe's press toward a renewed relationship with Moscow that have the world concerned.

Yesterday, thousands of Japanese citizens took to the streets to protest Abe's plan to change the country's fundamental war laws in the coming months.

Specifically, the Japanese prime minister is looking to overturn the peace-promoting Article 9 of the country's constitution, which states, "The Japanese people forever renounce war as a sovereign right of the nation and the threat or use of force as means of settling international disputes. It also promises that "land, sea, and air forces, as well as other war potential, will never be maintained."

Abe has already passed legislation through that enables the country's troops to deploy overseas and engage in offensive military action. Now he needs a two-thirds majority to completely overturn the 69-year-old constitution.

Some wonder if Abe's push to reverse the constitution while renewing a bond with Russia suggest militaristic intentions. China seems particularly concerned about this aspect.

Yesterday, China's Foreign Ministry Spokesman Hong Lei urged Japanese leaders to listen to its citizens' calls for peace and to play a constructive role for regional peace and stability.

On May 2, Japan renewed economic ties with Thailand, an important base for many Japanese companies, after Japanese investment in the country took a nose dive last year.

Thailand is a major player in the South China Sea dispute. And Thailand and Russia already have a long-standing relationship with one another.

Save Puerto Rico... Ahora! Congress has yet to make a final decision on how to deal with Puerto Rico's dire debt crisis. Unfortunately, if the government its streak of inaction, the burden will fall on taxpayers' shoulders. Here's what needs to happen... and fast...