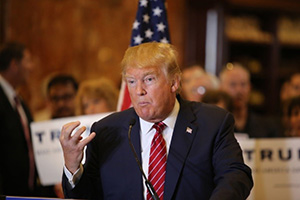 Democratic presidential nominee Hillary Clinton has been heavily attacked for her tendency to flip flop on key issues. So much so that on Feb. 25, the "#WhichHillary" hashtag took Twitter by storm, prompting social media users to highlight the diametric positions Clinton has held over the course of her political career. (For the biggest Clinton flip flops, check out our list here.)

Just a day after a decisive win in the Indiana primary, Donald Trump has reversed course when it comes to nationwide minimum wage policy.

Donald Trump: People Need Something They Can Live On

Yesterday, Trump told CNN's Wolf Blitzer that he is "open to doing something" with the country's minimum wage and added that any increase would have to be weighed against a potential loss of competitiveness.

"I mean, you have to something that you can live on," Trump said. "But what I'm really looking to do is get people great jobs so they make much more money than that."

The real estate mogul stated that he has been studying the minimum wage issue and did not know if the current federal minimum wage of $7.25 per hour should be raised as high as the $15 per hour "living wage" advocated by Democratic presidential candidate Sen. Bernie Sanders.

Hillary Clinton, the likely Democratic nominee, has said that the federal minimum wage should be raised to $12 per hour.

Trump's reversal on minimum wage policy took the mainstream media by surprise. The candidate was previously adamantly opposed the idea of hiking the federal wage rate throughout his time campaigning for president. At a GOP debate last November, Trump said, "We have to leave it the way it is. People have to go out, they have to work really hard and have to get into that upper stratum. But we cannot do this if we are going to compete with the rest of the world. We just can't do it."