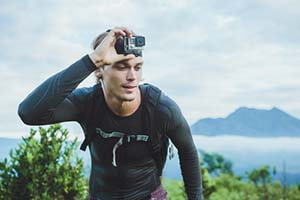 The GoPro stock price tanked 7% to $9.81 this morning (Friday) after disappointing Q1 2016 results. It's been a tumultuous year for GPRO stock, with shares down 44% year to date.

Now, Money Morning readers have been asking us what to expect from the GoPro stock price moving forward. But before we get to our GPRO stock price outlook, here's exactly what you need to know about the Q1 earnings report…

After Thursday's close, the wearable camera maker posted better than expected quarterly revenue. Still, revenue was down 50% from the same quarter a year ago.

GoPro reaffirmed its FY2016 guidance for $1.35 billion to $1.5 billion in full-year sales. That range would also mark a year-over-year sales decline.

GoPro also pushed backed the upcoming release of its drone camera. Named "Karma," the drone camera is more than a year in the making and was deemed a possible catalyst for growth in 2016.

The company didn't offer many specifics, only saying it needed to work on some of the drone's features. That has investors and analysts questioning the company's credibility.

The GoPro stock price initially spiked more than 7% after hours Thursday because of the earnings beat. But when investors dug deeper into the report, they turned very bearish.

And even though the GoPro stock price in 2016 is down 44%, the biggest troubles may still be ahead for GoPro…

Poor GoPro earnings results are turning into a trend.

GoPro remains one of the most heavily shorted stocks. The latest available Nasdaq data shows that GoPro short interest sits at 23,865,106 shares.

GoPro's helmet- and body-mounted cameras are wildly popular with surfers, skydivers, and other adventure sports enthusiasts. Yet the company has not garnered mass appeal and wider adoption of its devices.

The company is also facing pressure from improved video-shooting abilities that today's smartphones offer. That has weighed on traditional cameras and GoPro products.

The GoPro stock price does not look appealing outside its potential as a takeover target, according to Ross Gerber, president and CEO of Gerber Kawasaki Wealth and Investment Management.

"It would be a wonderful addition to many companies, but beyond that I just don't have a lot of hope," Gerber said Thursday evening on CNBC's "Closing Bell."

We've been bearish on the GoPro stock price since it peaked in October 2014.

At its all-time October 2014 high, Money Morning Chief Investment Strategist Keith Fitz-Gerald advised investors that the hype did not justify the stock price.

The GoPro stock price is off nearly 44% year to date and 78.77% over the last year. Drone or no drone, we recommend avoiding GoPro stock in 2016.