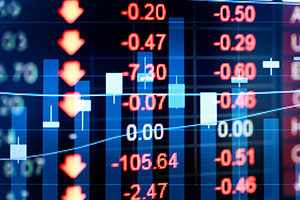 Dow Jones Industrial Average News, 5/9/2016 – A weekend surprise in Saudi Arabian energy policy and the ongoing containment of the wildfires in Canada pushed oil prices down, overshadowing a strong rally for biotech stocks on what was a relatively tame day for the markets. Traders are still digesting Friday's weak jobs report, but a stronger dollar pushed down gold prices and silver prices. Gold fell 2.2% on the day.

The U.S. Federal Reserve is back in focus again. Today, former Goldman Sachs Group Inc. (NYSE: GS) banker and current Minneapolis Federal Reserve Bank President Neel Kashkari said that he believes that interest rates and current monetary policy are "about right" for the nation. Kashkari expressed further support for Fed Chair Janet Yellen, who has taken a very patient approach with interest rates. Kashkari said that an interest rate hike in June is possible. According to CME FedWatch, the probability of a rate hike is roughly 9%. The markets indicate that there is a 54% chance of a rate hike in December.

It was a great day for healthcare stocks. The sector received a huge boost from Allergan Plc. (NYSE: AGN), which saw gains of 6% on the day. AGN stock received a boost from analysts who projected that the Dublin-based pharmaceutical giant and manufacturer of Botox could see its stock increase by as much as 90% in the year ahead. Shares also rallied on news that Teva Pharmaceutical Industries Ltd. (NYSE: TEVA) plans to close its $40.5 billion purchase of Allergan's generic drug business next month. It was the best day for biotech stocks since April 21, as the iShares NASDAQ Biotechnology Index ETF (Nasdaq: IBB) gained 2.5%.

Next, the odds of a megadeal in the newspaper industry are falling on news that Tribune Publishing (Nasdaq: TPUB) has adopted a poison pill to stop an unsolicited takeover bid from Gannett Co. (NYSE: GCI). TPUB stock fell 6% on news that the firm is rejecting the $815 million deal and will enact a shareholder rights plan to prevent future offers. GCI stock was off 1.1% on the day.

Crude oil prices slumped after the world's most powerful man in the energy industry was fired by Saudi Arabian officials. Over the weekend, Saudi King Salman replaced Ali al-Naimi, the oil minister in charge of the country's energy policy since 1995. Khaled al-Falih, the chairman of the state-owned oil titan Saudi Aramco, was sworn in to take his place.

Brent crude prices slumped nearly 4%. Meanwhile, WTI crude oil fell nearly 3% as Canadian officials announced they are handling the wildfires in Alberta, Canada, that have shuttered roughly one-third of the province's oil sands production. Here's more on why oil prices are sliding, but more important – where they are heading in the coming months.