While most states have recovered from the Great Recession – they have not all done so equally.

Some states are thriving now, like energy-rich Alaska and the Dakotas. But others — with big pension responsibilities — are trailing far behind, like New York and New Jersey. These are the most bankrupt states, according to a 2015 study by George Mason University's Mercatus Center.

Several states, according to the research policy group's findings, still face an uncertain fiscal future due to skyrocketing government spending and state debt.

The study looked into five areas in particular to determine results:

The bottom-performing states might come as no surprise: New York (46), Connecticut (47), Massachusetts (48), New Jersey (49), and Illinois (50) did poorly across the board. They had little cash on hand to cover short-term bills, difficulty balancing budgets, unsustainable long-term expenses, and an astonishing level of unfunded pension liabilities.

The top five states may come as no surprise either; each owes their fiscal prowess to a dependency on oil, gas, and natural resources revenue: Alaska (1), North Dakota (2), South Dakota (3), Nebraska (4), and Florida (5). These states had cash on hand to cover short-term spending, yearly revenues that exceeded spending, low levels of debt, and relatively small levels of non-pension benefits — known as other post-employment benefits (OPEB). 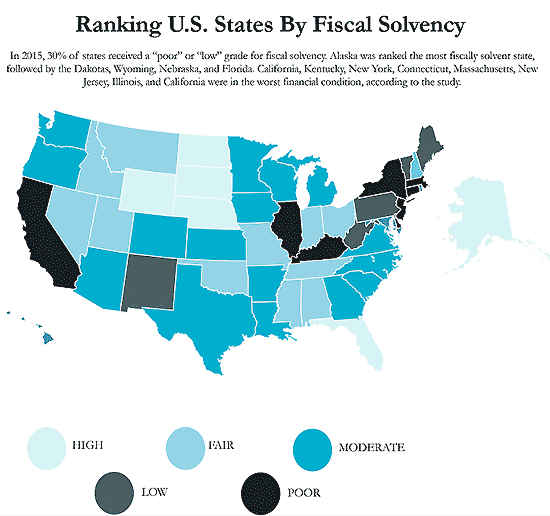 California has an 11 billion dollar surplus. this whole thing is BS

This article was published in 2016…. never updated