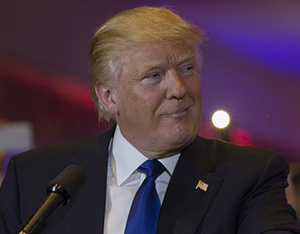 It's not only possible, but probable that Donald Trump will shock the world by winning the White House this fall.
Such a prediction defies conventional wisdom at the moment. But Trump has an advantage that the political pundits have completely missed.

And it wouldn't be the first time. The political class as a whole has consistently underestimated Donald Trump pretty much from the day he announced his candidacy.

Virtually no one gave the Trump campaign a chance at even winning the Republican nomination, much less the presidency.

"The chance of his winning [the] nomination and election is exactly zero," The Atlantic's James Fallows declared on July 13.

"Our emphatic prediction is simply that Trump will not win the nomination. It's not even clear that he's trying to do so," said Nate Silver, the acclaimed election prognosticator of the website FiveThirtyEight, on Aug. 11.

And at first Trump's behavior appeared to vindicate those predictions...

Donald Trump's bombastic style and divisive campaign rhetoric only made his critics more certain that the New York billionaire's quest for the White House would quickly wither.

And yet once the primaries began, Trump surprised them all by winning early (New Hampshire) and often (20 out of the first 32 contests).

You'd think the politicos would have learned some respect for the Donald Trump campaign now that he has just about locked up the GOP nomination.

But many now are predicting a Hillary Clinton landslide in November. Republican leaders are terrified of a Trump drubbing so severe it will result in the loss of the GOP majorities in both the House and the Senate.

They needn't worry so much.

Because Donald Trump has a secret weapon that has vastly increased his odds of winning Election 2016...

It's true he faces what appears to be an almost insurmountable challenge in defeating probable Democratic nominee Hillary Clinton.

Large chunks of the electorate, including African Americans, Hispanics, and women, have good reason not to vote for Donald Trump because of things he's said.

The electoral map, which favors Democrats regardless of the GOP nominee, appears stacked against a candidate as controversial as Donald Trump.

The polls show Trump trailing Clinton in a head-to-head matchup, but he's not getting swamped in the way you'd expect. With little support among women and minorities, and with a large faction of the GOP vowing "never Trump," his poll numbers in a general election should be in the 30s at best right now.

But the RealClearPolitics average puts Trump's current deficit in a matchup with Hillary Clinton at just 6.5 percentage points.

Even that lead is not quite what it seems.

You see, the pollsters have consistently missed a fairly large chunk of Trump's support. Over seven of the most recent races, they underestimated Trump's margin of victory by an average by 7 percentage points - a huge discrepancy in the world of polling, particularly when aggregating multiple polls.

This hidden support for Trump could flip several key states such as Ohio, Pennsylvania, Florida, and possibly a few reliably blue states like Wisconsin and Michigan.

Some of these races are already close...

Why Polls Measuring Trump Support Are Getting It Wrong

The current models assume Trump will lose all the states Mitt Romney lost in 2012, as well as several more.

A Quinnipiac poll taken in those three battleground states and released today (Tuesday) suggests Trump is in a virtual dead heat with Hillary Clinton. The poll has Clinton up by just 1 percentage point in both Pennsylvania and Florida, and has Trump leading by 4 percentage points in Ohio.

I suspect Trump's support is broader than many think, and not just because he's hanging tough against Clinton in the polls so far. It brings me back to that wide gap between Trump's pre-election poll numbers and the actual results.

Why are the polls missing so much Trump support? Bad methodology? A surge in last-minute deciders going for Trump in state after state?

Those are all possible, but not likely given the large sample we're looking at.

Instead, I believe this group of Trump voters is so intimidated by his negative image that they're reluctant to admit -- even to pollsters -- that they intend to vote for The Donald. Odd yes, but not all that far-fetched for the most bizarre election cycle in decades.

If this holds true through November, Trump's vote totals will be several percentage points higher than polls indicate. It won't be enough to change the results in heavily Democratic states like New York and California. But in those battleground states, often decided by less than 2% of the vote, Trump's "secret" supporters should be enough to put him over the top.

Of course, much can happen in the months ahead. Donald Trump could blow this opportunity by persisting in alienating minority and women voters.

But don't be surprised if Donald Trump delivers a victory speech on the evening of Nov. 8.

The Bottom Line: Even after his decisive victory in the Republican presidential nomination race, few give Donald Trump a chance to defeat Democrat Hillary Clinton in November. But he has more support than many suspect, and has a secret cadre of support that's not showing up in the polls. That "secret" support will be enough to swing several key battleground states to Trump's column, giving him the electoral votes he needs to win the White House.

More Trouble for Hillary Clinton: The FBI investigation of Hillary Clinton's email server continues to lurk in the shadows of her campaign. But how she handled her emails while secretary of state may not be the most damaging part of the FBI investigation. Here's where the FBI is digging now - and why fresh revelations could jeopardize her hopes for the White House...