Last time, we discussed the threat that the "too big to fail" banks pose to the global economy – that their size and structural weaknesses are enough to push markets to the brink.

The U.S. Federal Reserve's manipulation of interest rates and regulatory pressure from the likes of the Basel Accords are impacting big banks' earnings growth across the globe. How the banks are working around impediments to their profitability could trigger the next big "system shock" along the lines of what we saw in 2008.

Today, we're going to take a look at what that "system shock" will look like, and how the big banks' Q1 2016 earnings are just more evidence that the next catastrophe is inevitable. 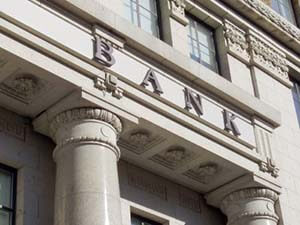 In addition to structural, business-model, and capital and liquidity issues big banks face, they are prone to potentially catastrophic systemic shocks.

Any big bank considered to be on the verge of failure would suffer immediate "reputational risk," causing the bank's equity cushion, in the form of its stock price, to plunge and precipitate a bank run as depositors flee and funding sources evaporate.

Not only do all big banks face individual reputational risk, all big U.S. and big European banks are counter-parties with each other on trillions of dollars of derivatives trades.

Systemic risks impact all big banks almost equally on account of interconnectedness in terms of interest rate risks, credit risk, derivatives risks, syndicated loan risks, and concentration risk resulting from most of the world's big banks plying the same trades, going after the same business lines, relying on the same liquidity measures, the same types of capital, and each other.

The impact of systemic risk across all big banks is front and center in the banks' first-quarter 2016 earnings reports.

They've all claimed "volatility" affecting all the markets and business lines they all rely on for revenue, impacted their earnings.

Looking at big banks' earnings in Q1 2016, seeing how interconnected they are and how they are all subject to the same systemic and structural risks, is a good indication that their difficulties, because of their size and the need for central banks to continue to support them, is having a huge impact on global economic growth.

But underneath those dubious headline earnings reports, only Wells Fargo had a positive uptick in only one measure of the bank's health.

While the big numbers were all mostly negative, they don't give a clear picture of the actual stresses these banks felt from hits to their big revenue-producing areas, the business lines where revenue generally can amount to as much as 60% of earnings.

Wells Fargo fared better than all other big banks in the quarter. While Q1 profits were down 5.9%, revenue rose 4.3%, and total loans rose 10% on strong consumer demand. NIM fell slightly from 2.95% to 2.9%. And the big energy lender charged off $204 million of energy loans, an increase of 75% from Q4 2015. But Wells comforted investors identifying only 2% of its loan book being exposed to energy.

Besides the big six U.S. banks, the rest of America's sizable banks also suffered through the first quarter.

Things Across the Pond Are Even Worse

Earnings at big European banks have been dismal.

The price of credit default swaps, insurance against their default and bankruptcy on big European banks in the first quarter of 2016 doubled.

According to the IMF, European banks – which lost over $600 billion in the mortgage meltdown of 2008 – are sitting with just over $1 trillion in bad debts on their balance sheets.

Some 20% of the "assets" on Italian banks' balance sheets are "impaired" or in default.

As earnings roll out from big European banks, Europe and world markets are reeling.

Earnings and revenue at the rest of Europe's big banks are coming in somewhere between Deutsche Bank's and Barclays', but are generally terrible.

Eight years after the credit crisis, most big American banks and almost all big European banks are relapsing in spite of extraordinary central bank efforts – not to stimulate economic growth, but to liquefy and engineer profits for the big banks.

One reason global growth's been so anemic is that big banks have been the recipients of central bank largess, which was supposed to trickle down into economies as cheap loan money to spur demand, production, and economic growth.

But that hasn't happened to any meaningful degree.

Because the world's big banks are in constant need of central bank backstopping, and use central bank asset purchasing schemes to enrich themselves instead of increasing the velocity of money throughout the world, economies lack the capital they need to grow.

As long as big banks pose colossal risks to the global economy and draw tens of trillions of dollars of central bank spending (which they mostly hoard on their balance sheets to survive and thrive) away from productive economic use, global growth will continue to stagnate, until it contracts dramatically and implodes the big banks all over again.

In the meantime, big banks are going to pursue earnings growth at all cost.

They're already being accused by some analysts and regulators of end-arounding stricter capital requirements by reclassifying assets as less risky (reducing the amount of reserves and capital they have to set aside) via changes in how they "mark" their assets against internal risk models.

Given their size and the need for economies of scale, big banks will increasingly push the limits of regulations, trading, product development, and leverage to grow their earnings and profits to flush-up bankers' bonus pools.

The only way to escape the financial terrorism imposed on countries by big banks and their government-sanctioned central bank backers is by breaking them all up so they're not too big to fail.

Only by breaking the stranglehold central banks and mega-bank oligopolies have on the entire world will credit be freed up and capital markets be free to perform their function of allocating capital and credit.

Why Investors Shouldn't Bother with Hedge Funds Anymore: Media criticism of Wall Street's lords of finance isn't just noise. There's good reason for the growing negative sentiment surrounding hedge funds and their managers – and their fall from heaven will be a godsend to independent investors…

It may take breaking up big banks. If they are not too big to fail, they may act more responsibly.