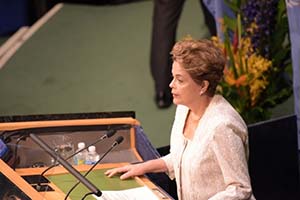 Today, Brazil's embattled President Dilma Rousseff will find out whether she will face impeachment charges from the country's Senate or not.

We've dug up a fantastic video that explains what's going on in Brazil -- one of the most complex political situations of the century -- in an impressive 10 minutes.

But first, we've put together a short primer for you in the written word...

Today's impeachment vote is the latest development in a political crisis that has gripped Brazil -- and a multibillion-dollar government corruption scandal lies at the heart of it all.

You see, between roughly 2004 and 2014, Brazil's state-run energy firm Petrobras was involved in a $5.3 billion corruption scheme -- one of the largest ever to be uncovered.

In order to fully understand what is going on in Brazil, it's important to understand how that scandal played out...

Rousseff's Role in the Petrobras Scandal

The plot involved construction executives who essentially created a cartel to fix bids on Petrobras contracts and overcharge the company. The overcharge profits were divided between Petrobras workers and politicians.

Now, there is no evidence that President Rousseff was directly involved in the corruption herself, but she was chairwoman of Petrobras' board from 2003 to 2010 -- so the corruption happened under her watch.

President Rousseff stands accused of other charges as well. For instance, she was allegedly "window dressing" the government's books to hide the extent of Brazil's deficit problem so she could win re-election in October 2014.

But Rousseff has denied any wrongdoing and has repeatedly rejected calls to resign. She says the impeachment proceedings amount to a "coup."

Yet another layer to the complex situation in Brazil is the involvement of the country's hugely popular former President Luiz Inacio Lula da Silva. "Lula" was a Leftist "Worker's Party" politician who proved uniquely capable of uniting the ideals of Brazil's working-class poor with those of the country's large corporations.

Rousseff is Lula's protégé. That the two seem inextricably caught in the net of the Petrobras scandal has tainted the Worker's Party. Perceived association with elite corruption flies in the face of the party's core platforms: dismantling government corruption and scandal.

Which brings us back to what might happen to President Rousseff tomorrow and this excellent, unbiased rundown we dug up on today's events...

What's Going On in Brazil Today?

If two-thirds of Brazil's 81 senators vote in favor of removing Rousseff from office, then she will have to step down for 180 days to defend herself in an impeachment trial. Then, if no decision is reached among the Senate within 180 days, the suspension of the president ends.

If the Brazilian Senate does vote to impeach Rousseff, she can appeal to the Supreme Court, but could be out of office as early as this month.

During the trial, however - and should impeachment actually occur - Vice President Michel Temer is expected to step in to take her place. Of course, Brazil has few options...

Temer's party, the Brazilian Democratic Movement Party, or PMDB, has also been implicated in the corruption scheme.

Now here's a fantastic video by VlogBrothers -- an online YouTube channel from acclaimed author John Green and his brother Hank that's dedicated to "dispensing digestible adult wisdom" - that gives a detailed but short outline of what's going on in Brazil:

VlogBrothers: "Brazil's Government Is Falling Apart... and It's Good News?"

What's the State of the Economy? While most states have recovered from the Great Recession - they have not all done so equally. Some states are thriving now, like energy-rich Alaska and the Dakotas. But others - with big pension responsibilities - are trailing far behind, like these...