Hardly anyone wants to buy Apple stock now, it seems.

He thinks investors should buy AAPL stock now while the negative sentiment among the Wall Street "experts" is running high.

"Remember, these are the same 'minds' who never saw the financial crisis coming and who only recently got around to downgrading Exxon Mobil Corp. (NYSE: XOM) after oil's rebound," Robinson said.

But with Apple stock so out of favor, now is the ideal time to grab some shares. That's why AAPL stock is the Money Morning Pick of the Week.

Apple Inc.: About the Company

Apple's history is the stuff of Silicon Valley legend. The company was founded in 1976 by friends Steve Jobs and Steve Wozniak as Apple Computer Inc.

The pair struck upon the idea of selling a personal computer as a fully assembled unit rather than as a kit, as was the norm at the time. The Apple I was a success and inspired Wozniak to design the Apple II -- a much more polished product that would appeal to the masses.

The Apple II series was the company's first huge hit, raking millions of dollars in profits. Apple held its IPO in December 1980. Meanwhile, Jobs used those massive profits to start building the next game-changing product, the Macintosh.

In 1985, Jobs was forced out of Apple, and within a decade company faced an existential crisis. Apple bought NeXT Computer in 1996, which brought fresh technology and a familiar face - Steve Jobs.

The iPhone in particular revolutionized the mobile phone industry. The iPhone's success multiplied the company's revenue so much that by 2013, Apple pushed past Exxon Mobil to become the most valuable company in the world.

Sadly, Jobs died in October 2011. Tim Cook succeeded him as CEO and has led the tech giant to new heights - Apple earned more profit in the December quarter of 2015 than any company in history.

Today, Apple employs about 110,000 people worldwide and has annual revenue of $227 billion.

Apple's amazing achievements over the past decade have created impossibly high expectations for AAPL stock, which is one big reason why shares have suffered so much lately...

What You Need to Know About Apple Stock

Apple, as they say, is mostly a victim of its own success. The blockbuster iPhone 6 models sold phenomenally well, but set the bar beyond even Apple's reach. And Apple depends on the iPhone for about two-thirds of its revenue.

So you have quarterly numbers that look weak compared to those a year ago. Plus, the global smartphone market has matured, with growth dropping into the single digits.

Concerns about iPhone sales started last summer and have taken a heavy toll on the Apple stock price. Over the past 12 months, AAPL stock is down more than 30%. Since Jan. 1, Apple stock is off more than 14%, while the Standard & Poor's 500 Index has been flat.

Now the AAPL stock price is hovering near a two-year low of about $90. Apple has always been a momentum stock, so when times are good, it skyrockets, and when times are bad, it gets slammed unusually hard. 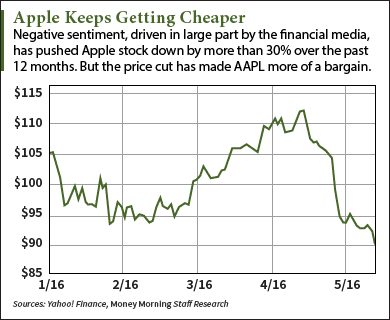 "That see-sawing opinion is a sign of amateurism," Robinson said. "It reflects a shallow understanding of the fundamentals underlying these shares."

Here's where the conventional wisdom is going wrong - and why investors should buy AAPL stock now...

Buy Apple Stock Because It's in Wall Street's Doghouse

According to Robinson, the media is too focused on comparing Apple to itself to see that the company is still extremely successful.

"Apple has a huge market cap and $213 billion in cash," Robinson said. "And in that 'disappointing' earnings report they sold 51.2 million iPhones."

But what about Wall Street's concern that the iPhone's days of growth are over?

He sees iPhone sales to China in particular gaining renewed strength, driven by a middle class expected to quadruple over the next four years to 450 million and an upper middle class set to grow to 100 million.

And Apple is also having success against its main rival, Android.

"China is in the midst of a kind of 'mass conversion' from cheaper Android devices to much higher-end Apple and iOS products," Robinson said. "These types of upgrades were up 40% September through March, compared to the same period a year ago."

And Apple is just getting started in India, home to more than 1 billion consumers. This week, Apple announced plans to work with Chinese partner Foxconn to build several factories in India that will assemble iPhones.

As the Apple stock price falls, it becomes a better and better deal. The price/earnings ratio is below 10, compared to an average P/E of 17 for the S&P 500.

And despite the steep fall in price, the one-year targets have only nudged down a little. According to Yahoo! Finance, the one-year consensus price target on AAPL is $126.25; Morningstar has a fair value estimate of $133.

That's a 47% gain over the current price.

And if AAPL doesn't rebound for a while, that's OK, too. Because of the generous stock buyback program and annual dividend hikes, Apple is also evolving into a cash cow.

The dividend yield is now about 2.5%. But Apple has made a habit of making fat dividend increases every year - 10% or more.

Should Apple maintain its rate of dividend increases, which it should, the annual dividend will be about $3.64 in five years. But if you buy Apple stock now, your "yield on cost" (your yield calculated on the price you paid, about $90) will be a hefty 4%.

And that's in addition to the gains you'll make on the rise in the stock price.

"Make no mistake: This is the long-term bargain of the year," Robinson said. "Consider adding more at even lower prices."

In Case You Missed It: The previous Money Morning Pick of the Week is a play on the e-commerce boom - but it's not an e-commerce stock. It's a business most investors overlook, which means it's deliciously undervalued right now.  Find out why this is "a stock that truly rewards investors"...

Apple could still go down further, maybe into the mid-$80's. I would not be in a hurry to buy a stock that has no momentum and has yet to stage a sustained rally. Its one thing to be a contrarian, but its another to be a good investor, and the difference is timing.