And Money Morning Resource Investing Specialist Peter Krauth – who has two decades of gold investing experience – says there are two reasons why prices will continue higher in 2016.

This Is Why the Price of Gold Is Surging in 2016 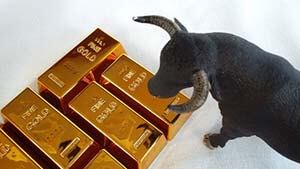 A report from the World Gold Council (WGC) today shows gold demand is rising faster than ever. During the first three months of 2016, demand for the metal soared 21%. Investors piled into gold due to worries of a global slowdown and market volatility.

Other factors that influenced the gold price rally were the 4% decline in the U.S. dollar and forecasts for stalled global growth.

Last month, the International Monetary Fund warned that global economic growth should slow. The IMF trimmed its growth forecast by 0.2% to 3.2%, citing China's troubled economy and the ripple effects of developed and emerging economies.

But that's not all. In fact, Krauth says there are two more factors that will rally the price of gold this year…

Inflows of ETF investments reached a seven-year high in the first quarter. According to the WGC report, this rise in ETF inflows indicates investors are building long-term rebound positions in the wake of the gold's crash back in 2013.

Another reason for the bullish gold price outlook is gold demand from investment banks and central banks.

Despite these bullish factors, Krauth warns there may be some pullbacks in the price of gold along the way. Short-term volatility is to be expected while gold posts huge gains over the long term.

But we've selected the best gold stocks to buy in 2016 to profit from this specific trajectory. You can find our picks here…

Stay informed on the price of silver by following us on social media.

This Other Metal Is Also Set for Big Gains This Year… Silver prices were another big performer during the first quarter, gaining more than 11%. But like gold, Krauth sees silver rallying in 2016. And it's all thanks to these three factors…