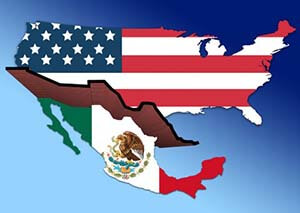 It's a staple of Donald Trump campaign rallies.

"What do we want?" Trump will say to a crowd of supporters.

"And who's going to pay for it?" Trump says.

Building some sort of wall on America's southern border has been one of Donald Trump's key - and most controversial - campaign pledges.

Critics have lambasted the idea, saying it's unnecessary, prohibitively expensive, fraught with legal and physical complications, and an affront to Mexico.

But even if Trump can overcome all those objections, his pledge to force Mexico to pay for it also faces challenges.

Trump's plan to do this, outlined on his website, involves several forms of coercion. The primary tool he plans to use is the seizure of remittances - money sent from immigrants in the United States back to family living in Mexico.

Such a move would be devastatingly effective...

How Donald Trump's Plan to Squeeze Mexico Would Work

Mexican immigrants send an estimated $24 billion back home each year. The money is critically important to the Mexican economy. Those who receive remittance payments typically use the money to pay for such basic needs as rent and food.

Recognizing that Mexico would object strongly to losing this lifeline, Trump's plan offers a ransom-like alternative. A one-time payment by the Mexican government of $5 billion to $10 billion (apparently the exact amount is negotiable) will "ensure that $24 billion continues to flow into their country year after year."

Mexican officials have objected to Donald Trump's plan in a number of colorful ways.

In a podcast interview with Kickass Politics, Fox said Mexico could counter Trump's threat on remittances by interfering with money transfers from U.S. corporations and American tourists trying to send money from Mexico to the United States.

Fox also implied that Trump's wall, if it is ever built, would be ineffective.

"Don't play around with us. We can jump walls, we can swim rivers, and we can defend ourselves," Fox said.

But so far Mexican officials have not brought up one countermeasure at their disposal that would completely neutralize Trump's threat to seize remittances.

Even a President Trump would be powerless to stop this...

Why Donald Trump's Attack on Mexican Remittances Will Fail

In putting together his plan to compel Mexico to pay for a border wall, Trump has overlooked a huge loophole.

It's understandable because this alternative way for moving money across international borders is only a few years old.

The digital currency is ideally suited to get around the sort of hardball tactic Trump has proposed.

With Bitcoin, two people can transfer money to each other directly, without the need for any institutional intermediary.

The peer-to-peer nature of Bitcoin also means that such transfers are invisible to the government. Even if Trump could overcome the legal hurdles to his plan to impound remittances, the "Bitcoin option" renders his threat toothless.

The problem for Mexico right now is that Bitcoin adoption there is relatively low. The country has fewer than 10 Bitcoin ATMs. But Mexicans do have access to several exchanges - Bitso, MexBT, and Volabit - where people could convert received Bitcoin to Mexican pesos.

And if Trump manages to win the U.S. presidency in November, it stands to reason that entrepreneurs will jump at the opportunity to serve a $24 billion market.

The gears have already started turning...

Spreading the Word on Bitcoin 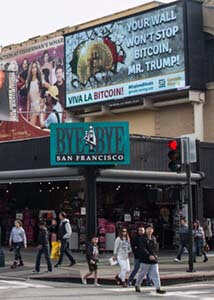 Last month Genesis Mining, a Bitcoin cloud mining provider, bought several billboards in California taunting Donald Trump and his plan to get Mexico to pay for a wall.

"Your wall won't stop Bitcoin, Mr. Trump!" the billboard says. Genesis Mining would not provide remittance services itself, but is seeking to raise awareness of Bitcoin as an alternative.

And at least one U.S.-based Bitcoin ATM company, CoinOutlet, is considering moving into Mexico.

And using Bitcoin for remittances is more than a way to thwart Donald Trump. Fees on money transferred via Bitcoin are less than 1%, compared to the 3% to 5% charged by money transfer companies like The Western Union Co. (NYSE: WU) or MoneyGram International Inc. (Nasdaq: MGI).

Bitcoin transfers are also much faster, taking only about 10 minutes. Funds moved via money transfer companies can take a day or more to arrive.

Should Trump try to execute his plan, these advantages would provide even more incentive to switch to Bitcoin-based methods of remittance.

A President Trump may well choose to build a wall on the nation's southern border, but thanks to Bitcoin, he'll never get Mexico to pay for it.

He knows more than you give him credit for
We all know that we love our neighbors, but
We don't appreciate it when the guards are paid off, and are given guns and ammo, and
Then bring in drugs not only from their country but drugs from Afghanastan also?
He's not talking to them about a freaking wall!

If Trump gonna win, USA will loose just like Britain with brexit. The markets will fall because he is just not trustworthy. But anyway he will not win. Hillary will win and she could be even worse so USA is in an loose/loose situation right now its just about damage limitation…