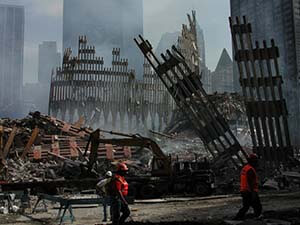 Workers search through the debris at Ground Zero on Sept. 20, 2001.

Some serious fractures have come to light within the 9/11 Commission, the committee responsible for issuing the official "9/11 Report" that evaluated the U.S.' preparedness for and response to the terrorist attacks. Its official findings – with the exception of 28 redacted pages – were released to the public back in July 2004.

A former commission member and one-time Reagan advisor, John Lehman, told The Guardian yesterday that there is evidence in those redacted "28 pages" that Saudi Arabia aided the hijackers.

By making this statement, Lehman essentially "broke rank" from the nine other commissioners – all of whom have kept their identities anonymous in the wake of the "28 pages" scandal.

You see, the 9/11 Commission's original final report stated there was "no evidence that the Saudi government as an institution or senior Saudi officials individually" were involved in 9/11.

"There was an awful lot of participation by Saudi individuals in supporting the hijackers, and some of those people worked in the Saudi government," Lehman told The Guardian.

He went on to explain that at least five Saudi government officials were strongly suspected of supporting the terrorists. "They may not have been indicted, but they were certainly implicated," he said. "There was an awful lot of circumstantial evidence."

The former Reagan advisor admitted he doesn't think the Saudi royal family or leadership were directly involved in 9/11, but said there was a criminal investigation of employees of the Saudi Ministry of Islamic Affairs.

He then stated that the redacted 28 pages should be made public as soon as possible.

The White House is currently reviewing the top-secret portion of the report for possible release. President Barack Obama is expected to announce a decision about declassification in June…

Meanwhile, Congress has raised the stakes of the scandal on its own by taking up a bipartisan bill that would allow victims of 9/11 and other terrorist attacks to sue foreign governments linked to them.

In response to the bill, Saudi Arabian officials have threatened to retaliate by selling off billions in American assets. More on that here…