But panic selling is not the way to play Netflix Inc. (Nasdaq: NFLX) right now.

We have a full recommendation on how to play the falling NFLX stock price, but before we get to that, here's what has been weighing on Netflix stock in 2016…

Netflix has been under pressure this month, even though it posted strong Q1 results on April 18. 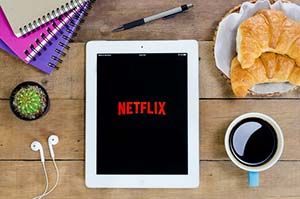 Netflix added 6.74 million new memberships in Q1. Of those, 2.23 million came from the United States and 4.51 million came from international markets as the company expanded into 130 countries. Wall Street consensus was for Netflix to report 4.36 million new members internationally and 1.77 million domestically. That's according to data from StreetAccount.

Despite the bullish EPS and membership numbers, the company's guidance figures were disappointing. And that has been weighing on the NFLX stock price…

CEO Reed Hastings explained international growth is uneven because of how the rollout is working in different markets. There had been a sizable uptick because of pent-up demand in some areas. But that might not continue in the future.

That's why Netflix's international growth is so important…

And that's not the only concern that has weighed on Netflix shares in 2016. Here is another reason why the Netflix stock price has been falling this year and how we recommend playing NFLX moving forward…

A major emerging competitor for Netflix is behemoth Amazon.com Inc. (Nasdaq: AMZN). On April 18, Amazon made its Prime Video streaming service available as a standalone offering.

But Netflix is stepping up its game with new developments and video content that could attract new customers and keep existing ones coming back for more.

Netflix has plans to add 10 feature films, 30 kids' shows, and 12 documentaries this year alone. The company has made a total investment of $5 billion on these.

"Right now, they [Netflix] are going through an Amazon.com growth period," Money Morning Director of Tech & Venture Capital Michael A. Robinson said back in October 2015. "It's the Bezos model – build, build, build – then the profits will follow."

Netflix comfortably remains the leader in the streaming-video space. An earnings miss and new rivals are not likely to upset Netflix's commanding lead. And if talks of an activist push to shake up the company's board materializes, things could get very interesting for the NFLX stock price.

Still, shares are extremely volatile. That's why we recommend NFLX as a long-term investment.

Of the 44 analysts who cover the stock, 21 rate NFLX "Buy" and three maintain an "Overweight." Fifteen have a "Hold" rating, two have an "Underweight," and three rate shares "Sell," according to Wall Street Journal data.

This Other Metal Is Set for Big Gains This Year… Silver prices were another big performer during the first quarter, gaining more than 11%. But like gold, Krauth sees silver rallying in 2016. And it's all thanks to these three factors…

23083 Reads
Sell These 3 REITs Before It's Too Late
We love REITs, but they aren't created equal. These three REITs shouldn't be anywhere near your portfolio.