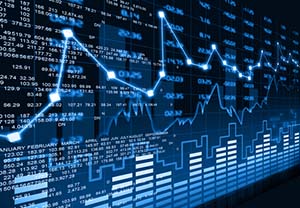 Oil prices pushed to their highest levels since November and fueled a nearly 200-point rally for the Dow Jones Industrial Average. The rally was a welcome one after a difficult few weeks for traders over concerns regarding the health and expected growth rate of the global economy.

It was another day of weak economic data from China. According to April reports from China, the nation's industrial production and investment readings fell below investor expectations. The weak economic data comes despite the People's Bank of China's aggressive stimulus efforts over the last year.

On the domestic front, the Empire State general index, which measures manufacturing activity in the New York region, cratered to a negative 9 reading this month. That's a significant swing from the 9.6 rating in April and fuels existing worries about weakness in the U.S. economy. Meanwhile, the National Association of Home Builders (NAHB) announced that U.S. homebuilder confidence remained at a 58 reading, its fourth-straight month at that level.

Crude oil prices rallied higher after Goldman Sachs Group Inc. (NYSE: GS) announced that it believes the global oil glut is over, and that investors should prepare for a deficit in supply around the globe. Meanwhile, infrastructure concerns in Nigeria rattled sentiment, and pushed Brent crude higher. WTI crude added 3%, while Brent crude pushed up 2.3%. Energy stocks pushed higher thanks to more than 1% increases in shares of Chevron Corp. (NYSE: CVX) and Exxon Mobil Corp. (NYSE: XOM).

On the deal front, Tribune Publishing (NYSE: TPUB) rallied more than 22% after receiving a second unsolicited bid from Gannett Co. (NYSE: GCO) for $15.50 per share. Barron's reports that Tribune Publishing had received urgent demands from its third-largest shareholder Oaktree Capital Management to accept a previous deal worth $12.50 per share. As Gannett aggressively tries to boost growth in market share, Tribune could see their investors push for the revised offer.

But the big news today was Warren Buffett – who dominated the headlines on multiple fronts.

First, Buffett said that his firm may take part in a takeover bid for embattled tech giant Yahoo Inc. (Nasdaq: YHOO). The technology giant saw shares of YHOO stock rally more than 1.7% on news that Buffett has emerged as a candidate to help finance a bid. Buffett said over the weekend that he could help Cleveland Cavaliers owner and Quicken Loans' head Dan Gilbert compete for the embattled technology giant. That puts pressure on Verizon Communications Inc. (NYSE: VZ), which has been viewed by many analysts as the front-runner for a Yahoo takeover.

Meanwhile, Buffett's Berkshire Hathaway Inc. (NYSE: BRK.A) announced that it now owns a 9.8 million share stake in technology giant Apple Inc. (Nasdaq: AAPL), according to 13D filings. But the more than $1 billion investment in Apple wasn't Buffett's idea, according to the investment legend. Buffett said this morning that the investment was made by Ted Weschler or Todd Combs at Berkshire. Shares of AAPL had their best day in four months, ticking up more than 4%.