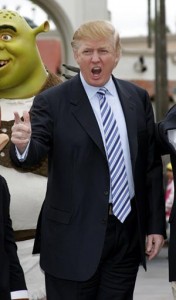 So far, he's raised roughly $48 million, according to the Center for Responsive Politics on April 20. But that's nearly four times less than the amount rival Democratic hopeful Hillary Clinton has raised (roughly $180 million).

Part of Trump's $48 million includes super PAC donations. In fact, more than $12 million of it — fully one-quarter of his total, reported The Atlantic on May 13.

But Trump donors looking to add to that number should beware: an increasing number of unauthorized super PACs are using the real estate mogul's name to raise money…

They're called "scam PACs" and they've been around for a while — especially since the 2009 explosion of the Tea Party. By using targeting techniques that resonate deeply among certain political groups, scam PACs collect large piles of small checks that add up to enough money to potentially sway a race.

In reality, however, these funds are used as massive payments to consulting firms for additional fundraising efforts. For example, in the 2012 presidential race, consulting firms billed super PACs upwards of $3.6 billion for products and services, reported The New York Times on Dec. 30, 2015. Of that massive sum, 70% went back to the firms that specialized in ad placement and production. Consultants earn big bucks for every ad they place. So it's not necessarily the candidates who get the money donated; it's the consulting firms behind the scene.

Now, Trump's supporters are particularly vulnerable to the PAC scams, reported Politico, because the demographic is typically neither "well-versed in election law nor attuned to the fine print of political solicitations."

Currently, more than two dozen unauthorized super PACs have formed in order to back Trump. They've raised a total of $3.7 million in order to do so, according to the most recent Federal Election Commission filings on April 20.

But only six of the groups – one-quarter of the total – have actually bought ads supporting Trump.

"I know that people maybe like me and they form a super PAC, but I have nothing to do with it," Donald Trump said, according to The Washington Post earlier today.