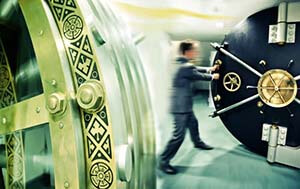 China's going for gold this summer.

The country's state-owned ICBC Standard Bank purchased a massive gold vault in London today, reported Bloomberg. The deal, which is expected to be completed by July, should boost China's access to the British gold market.

The "secret" vault — so-called because no one knows exactly where it's located — is one of the largest in Europe. Barclays Plc. (NYSE: BCS) built it in 2012 and sold it as part of a restructuring plan that includes exiting the precious metals business altogether. The "gold crypt" can purportedly store 2,000 tons of gold, silver, platinum, and palladium. That's up to $90 billion worth of the yellow metal at current gold prices (about $1,300 per ounce).

ICBC owns this title, insofar as assets are concerned. It will become the first Chinese lender to own a vault in London, and the deal will give the bank more influence over trading, pricing, and storage of precious metals. The purchase will also help stabilize the value of the yuan because buying gold helps increase confidence in the currency's worth.

This is precisely why China is scooping up so much gold. The country actually has been hoarding the yellow metal for quite some time. Only we're just learning about exactly how much because the International Monetary Fund (IMF) requested that the country make public records of such transactions available last year. The Red Dragon now issues gold reports monthly and, as of April, boasted 1,787 tons.

While that may seem like a lot, China actually lags the United States in gold reserves.

The U.S. has its own "world's largest" title when it comes to government gold reserves: We own more than 8,000 tons.