While the news has had little impact on the Facebook stock price today, which is down 0.7% in morning trading, this new source of revenue should have a large impact on FB's bottom line.

And today's news is far from the only long-term catalyst we see for the FB stock price. Before we get to our Facebook stock outlook, here's everything you need to know about today's news. 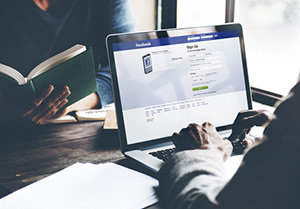 According to The Wall Street Journal, Facebook Inc. (Nasdaq: FB) will help companies sell video ads that are "in-stream" and "in-article" across third-party websites and applications. That could include Daily Mail, Mashable, and USA Today Sports Media Group.

The move marks the first time Facebook will be placing ads for other companies for a share of revenue. While details of the profit sharing are unknown, the ad agreement will unquestionably be a big revenue generator for Facebook.

Facebook usually takes 30% of revenue in its audience network (where it also sells display advertising). The rest is given to publishers, according to The Journal. Publishers can choose to include the video ads alongside with Facebook's Instant Articles feature. That's where media companies publish articles instead of links to their sites.

The move also pits Facebook against Alphabet Inc.'s (Nasdaq: GOOGL) subsidiary Google and other online ad specialists. In short, the battle for video ad sharing just got much more intense.

And Facebook already has an edge thanks to its massive user base.

Facebook continues to grow its brand, attract new users, and keep its existing users on the site longer. The introduction of live videos was a recent initiative and should position Facebook as a key video-serving platform.

Now, Facebook is focusing on monetizing that video. Video advertisements tend to be more engaging than other forms of digital marketing. As a result, marketers are willing to pay much more for them.

The goal of video ads, according to Facebook, is to focus on brand awareness and recall. For advertisers, it allows them to attract and target its most lucrative audiences.

Digital video ad spending in the United States is expected to grow 28.5% this year to $9.84 billion, according to eMarketer. That's an extremely bullish indicator for the Facebook stock price.

Why We're So Bullish on the Facebook Stock Price in 2016

One of the biggest catalysts for FB stock is the increasing popularity of its subsidiaries Instagram and WhatsApp.

Facebook has yet to monetize these platforms, but they are among the most popular social media platforms in the world. WhatsApp had 1 billion users in February 2016, while Instagram has another 400 million.

Another huge catalyst for Facebook stock is the company's entrance into the $150 billion virtual reality field. Facebook acquired Oculus VR in 2014 for $2 billion to help it venture into the world of virtual reality.

While virtual reality is now mostly associated with video games, the future capabilities and possibilities of virtual reality are vast. Facebook's goal is to connect teachers and students across the world, allow basketball fans to enjoy courtside seats, and create face-to-face meetings with patients and doctors, all from home.

And we are not alone in our bullish Facebook stance.

Of the 49 analysts who cover Facebook stock, 44 rate shares a "Buy." Four maintain an "Overweight" rating, and four have a "Hold." There are no "Underweight" or "Sell" ratings, according to data from The Journal.

Money Morning Director of Technology & Venture Capital Michael A. Robinson believes the FB share price will trade at $250 by 2020.